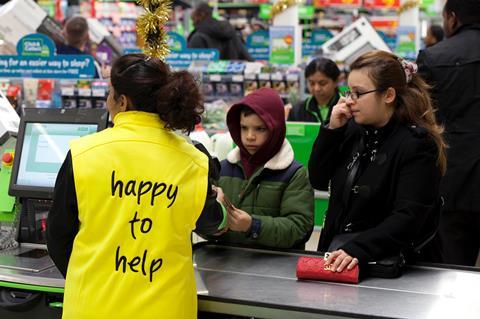 Asda has hit back at union claims it faces a boycott over a new staff contract by pointing out it could also gain new shoppers.

In the latest development in the row over the contract changes, GMB released a survey suggesting 37% of shoppers, equating to a claimed seven million people, were less likely to use the supermarket.

But Asda has pointed out the survey also found 17% said they were more likely to shop at the supermarket and 43% said the changes have no impact.

Around 200 workers had not signed the new contract for all hourly paid store staff by the 10 November deadline and no longer work for Asda as a result.

GMB has argued some workers were unable to agree to the new contract because it allows Asda to change roles and hours at four weeks’ notice, on top of scrapping paid breaks.

“Many workers, who have been with Asda for decades, have children, caring responsibilities, other part-time jobs that make such a level of ‘flexibility’ impossible,” GMB said yesterday.

Another 19% said they were more likely to do their Christmas shopping at Asda and 45% said it would have no impact.

“Following a robust, fair and extensive consultation process, we’re pleased that almost 120,000 of our retail colleagues are now working on the same contract, with the same terms and conditions and the same enhanced benefits package, including an increased hourly rate,” said an Asda spokesman.

“This contract is about fairness for all our colleagues and moves us in line with our competitors. We have always been clear that we understand people have responsibilities outside of work and we will always help them to balance these with their work life; we will not be asking them to constantly move the time they work, their days or departments.

“Although we did not want anyone to leave us as a result of this necessary change, around 200 people decided not to sign the contract. We are sorry they didn’t choose to continue working with us, but wish them well for the future. Whilst retail as a whole is under continued pressure, we will do all we can to ensure we have a sustainable business for our customers, our colleagues and the communities we serve.”

“Asda customers overwhelmingly want to be served by people who are respected and treated well in their jobs - no one wants to feel bad about doing their shopping, especially at Christmas.

“GMB don’t take any joy from this, because our members’ jobs depend on people shopping at Asda but people want to feel good about where they shop and clearly could vote with their feet.

“Asda could still rethink their plans and simply stop going down this route of imposing punishing new terms on loyal workers who work hard for them every day. GMB is calling on them to do just that.”