Made in Chelsea: Jamie Laing talks Candy Kittens in our big interview

Business mantra: Take the experience first, the cash will come later. With any luck…

Best advice received: Be nice to everyone on the way up, because you don’t know who you might meet on the way down. Be friendly

Worst advice received: When I was nine, someone told me ‘ask for forgiveness rather than permission.’ I realised it was bad advice when I broke into my stepfather’s flat to throw an after-party

Worst career move: I don’t regret anything. Everything I have done, I have made a decision to do it

Favourite movie: I do love frozen. And I like A Beautiful Mind

If you are unfamiliar with Made in Chelsea, here is the set-up: young, rich, glamorous people live it up in… well, you guessed it. It’s an example of structured reality TV, which has superseded plain old reality TV, because although the producers still film real people, they skilfully manipulate their lives to guarantee a mishmash of broken hearts and bitching. It’s hugely popular. And Made in Chelsea is a BAFTA award-winning example of the genre.

Among the stars of the show is Jamie Laing, a 25-year-old party boy with a talent for splashing his trust fund cash. An early episode saw him attempt to placate his exasperated trust fund manager by revealing his career masterplan - to launch a confectionery brand called Candy Kittens, promoted by babes in tight t-shirts. Everyone laughed. Except the trust fund manager.

Fast-forward two years and Candy Kittens is the number-one confectionery in Selfridges. Waitrose sells 7,000 bags a week and is about to launch the range on waitrose.com. It’s also secured listings in Europe, the Middle East and the US. So how did Candy Kittens go from reality TV joke to real life listings?

For Laing, it was never a joke to begin with. “In Made in Chelsea I’m the Boris Johnson buffoon-type character, so people thought I was crazy,” he says, earnestly. “But underneath I’m quite calculating. I know what I want to do. And I know how to create something.”

What he wanted to do was combine his lifelong love of sweets with the entrepreneurial urges running through his veins, courtesy of his great-great-grandfather, Sir Alexander Grant, who invented the digestive in 1892. He also ran McVitie’s, which later became United Biscuits, which was run by Laing’s great uncle Hector.

“So it’s in my blood,” says Laing. “In the beginning I wanted to have a real sweet shop like Dylan’s, in New York. I went there when I was 21 and people were spending $400 on sweets. It was crazy.”

He quickly realised a London equivalent would be “pretty expensive” so focused on the product instead. In 2011 he hired Ed Williams, 25, as MD to inject some business savvy into his stream of candy-consciousness.

Start-up cash came from selling Candy Kittens t-shirts online. “We sold 15,000 in three days,” says Williams. “Then, having taken the money, we had to make 15,000 t-shirts. We went on like that for a while.”

Then, suddenly, their sweet dreams turned sour. Their “first six months were wasted” when they split with their first production partner. “Everything collapsed,” sighs Laing. “We had to start again.”

Developing a winning product eventually took two years. Along the way they hired 23-year-old marketing manager Jesse Burgess, and a final range of four flavours emerged in October 2013. It took off fast, first in their online store, then Selfridges, then Topshop, then Harvey Nichols, before they realised they needed to move higher volumes. So they targeted Waitrose.

“It was so humbling that Waitrose loved the product,” says Laing. “It was the first time a company said ‘we love the product’ instead of ‘we love you.’ People think we can do whatever we want, because of my background, or because I am on TV, but it’s not like that. It’s been such a struggle.” 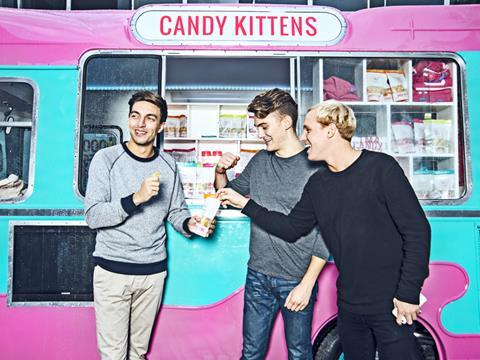 Having a family fortune to dip into must have helped? “I am in a very fortunate position,” nods Laing. “I come from a huge family and there is a pot, and each child has a stake in that pot. As one of those children, we can go to a trustee and make a business case to use some of it. We have done that twice now.”

To date, Candy Kittens has invested about £350,000, with 50% coming from “long-term loans” from Laing and the rest from six other shareholders. The bulk of the money went on product and packaging development, launching pop-up shops and several new hires to develop a solid infrastructure, including a financial director, a retail manager and a supply chain manager. “We are very excited to get a supply chain manager because it’s such a headache,” says Williams. “Waitrose predicted 5,200 units a week, then one week we sold 8,200. It was great news, but it murdered us.”

Sales are about £15,000 a week. About 25% come from Candy Kittens’ online store, where the average transaction is £15. Williams says the business aims for a “50% margin across everything” and that it “will be profitable next month.” And the listings keep growing. Ocado is next. The brand is also now available in Dylan’s, New York. “I got emotional,” grins Laing.

He took a look when he was in NYC filming episodes of Made in Chelsea. He “loves” doing the show, but is adamant he’s on it to drive his business forward rather than be a reality TV star. “God forbid. It would be awful. I used it as a platform to create this brand.”

Williams concedes reality TV can be a “double-edged sword” but for Burgess the show is a marketeer’s dream. “It merges TV and product placement with a PR campaign that would cost hundreds of thousands,” he says, although he adds they don’t solely rely on the show. “We do events, we tour cities in our Candy Kittens bus, we have our brand ambassadors… I try not to call them Kittens…”

Why not? “Well, originally we had a little bit of trouble being associated with a Playboy image which we never, ever, meant to get…”

But didn’t Laing once say he wanted to be a cross between Willy Wonka and Hugh Hefner?

Laing laughs. “As a kid you see the girls at the Playboy mansion and you think, that would be great, so why not go down that kind of route…”

“We have successfully moved away from that,” interrupts Burgess, before Williams chips in. “It was something somebody picked up on because it’s so quotable. And it’s easy to go down the Willy Wonka gimmicky route. But we are not, by any means, gimmicky.”

As if to prove it, when asked what’s next for the brand, Williams focuses on the serious. “Building infrastructure and reinforcing the supply chain. We are great at selling, but servicing those sales is a challenge. And we are not in the business of letting people down.”

And for now, Laing’s dream of a permanent sweet shop is on the back burner. “If I had my choice I would have a shop on the moon, but Jesse and Ed are more realistic,” he says.

So his focus remains on the product itself. More flavours and a vegetarian variety are on the way, plus a sugar-free version. Although Laing remains smitten by the real thing.

“Sweets are a treat,” he declares. “They are exciting and fun. Sugar isn’t the best thing for you in the world, but it makes you feel good and it tastes great. So why not brighten up your day by buying some?”