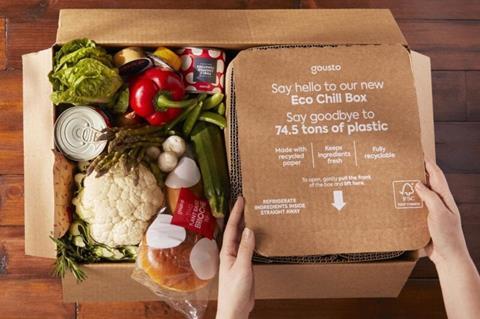 Recipe box company Gousto’s claims that its chilled delivery packaging was “100% plastic-free” and “100% recyclable” were misleading, the Advertising Standards Authority has ruled today.

Gousto made the claims in multiple blog posts on its website introducing the new ‘Eco Chill Box’ earlier this year. The boxes had been made “with absolutely no plastic” the company said and “every part of it is widely recycled”.

But it failed to mention that the boxes contained an ice pack made of low density polyethylene plastic – which only about 20% of local authorities in the UK had the facilities to recycle from household waste collection.

A complaint was made to the ASA by recipe box rival Hello Fresh.

Gousto argued to the ASA that the box and ice packs were discrete and that the “distinction was an industry standard”. Given the On-Pack Recycling Label scheme had approved its environmental claims for the box, and the ice packs were separate, “the recyclability of the ice packs was not relevant” Gousto said.

“The ASA considered that consumers would interpret references to the ‘Eco Chill Box’ in the ad to refer to the box as a whole, including all of its components,” the agency said.

“The box was described in the ad as a means of keeping food fresh, and we considered that consumers would expect this would necessitate the use of a cooling element, to keep food cold while in transit from Gousto’s warehouses to consumers’ homes,” it added.

Gousto has agreed to remove the claims from their advertising, and not use them again in future marketing efforts.

“Gousto prides itself on championing sustainability, transparency and clear communication,” a Gousto spokeswoman told The Grocer. “We believe our advertising is not misleading, in this case referring to an insulator which is 100% cardboard so therefore 100% recyclable and plastic-free. However, we respect the decision of the ASA and are acting accordingly.”