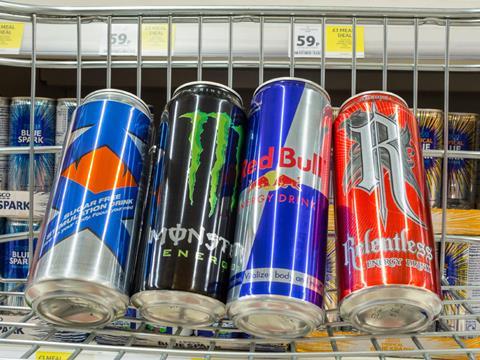 As the government mulls over a ban on energy drinks to children, research by The Grocer shows average prices have dropped again after surging in the wake of the sugar tax.

Supermarket prices for energy drinks spiked when the government first introduced the sugar levy in April 2018. From mid-March to mid-April, average prices were up 6% across a comparable list of 147 SKUs on sale in the major mults [Brand View 18 March 2018 to 18 April 2018].

However, prices began falling again in May and have now dropped back to the same levels as last year. Shoppers are paying £1.26 for a 500ml can or bottle of energy drink on average, compared with £1.25 last September.

But the major mults have slashed prices and ramped up promotions on SKUs that are exempt from the tax, which is bringing down average prices across the category.

A six-pack of Lucozade Energy Original 380ml bottles is 44p cheaper on average than last year at £2.66, while a four-pack of Monster Absolute Zero 500ml cans is 24p cheaper.

Manufacturers of energy drinks were among those singled out by campaigners as the worst performers on sugar before the government imposed its levy on the white stuff.

However, they worked hard to reduce the sugar in their drinks to below the taxable threshold of 5g of sugar per 100ml. AG Barr has reduced the amount of sugar in its Rockstar Punched Energy cans from a whopping 15.2g/100ml to 4.8g/100ml, for example, while Lucozade Ribena Suntory has cut sugar in Lucozade Energy from 14g/100ml to 4.5g/100ml.

However, caffeine levels remain across the wider energy drink category prompting concerns among health chiefs over the possible health impacts for consumers, particularly children and teens.

The government last week launched a consultation on its plans to make the sale of energy drinks to children illegal in England, with ministers seeking views on whether the ban should apply to under-16s or under-18s.

Retailers have welcomed the government’s plans, despite claims from opponents that it is “draconian” and ill-thought out.

The British Retail Consortium said outlawing the sale of energy drinks to kids would bring legislation in line with all the major retailers, who have already voluntarily banned sales of the drinks to under-16s.