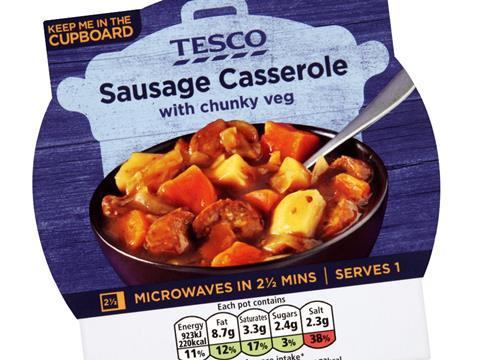 What: Sausage Casserole with Chunky Veg

Why: The three-year hangover caused by Horsegate is over and ready meals are again full of vitality, bagging an impressive £151.1m of value growth. Volumes are up 5% [Kantar Worldpanel 52 w/e 8 November 2015], and own label continues to drive the category. This ambient Tesco product is part of a selection that includes Minced Beef & Onion Stew and Chicken Casserole & Dumplings.

Consumer verdict: Some panellists were drawn pre-trial to the colourful pack design and the ease of preparation: less than three minutes in the microwave. But the product delivery fell well short of expectations, with more than half rating taste and texture as “poor/very poor”. The sausage was described as “poor quality”, “bland” and “processed”, while the gravy and “glutinous” vegetables were said to lack flavour. Despite the product’s convenience, only a minority of our consumers said they would buy after trial, with 71% claiming it was “not for me”.