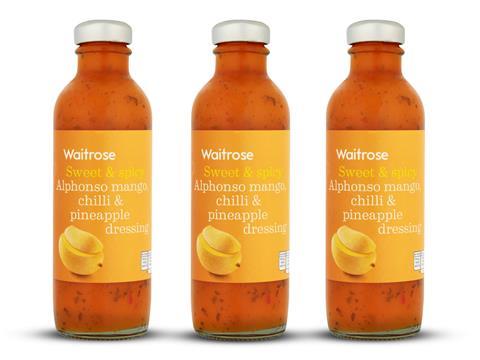 Why: Sales of chilli sauces were up 6.7% this year [Kantar Worldpanel 52 w/e 24 April 2016] as consumers, inspired by world cuisine, craved a fiery kick and were sated by a raft of NPD. This salad dressing capitalises on the trend with a combination of spicy and sweet fruit flavours. It is part of a Waitrose own-label range that also features Piri Piri, Blue Cheese, and Lemongrass, Ginger & Lime variants.

Consumer verdict: Before trial, our consumers didn’t know what to expect from such an unusual flavour combination. However, after tasting, a high proportion were surprised by the “sweet and sour” delivery, which had a “strong kick” of chilli. Almost two thirds said the product was ideal for entertaining. Some considered the texture of the dressing “watery” and “runny”, but other panellists were happy with the consistency and labelling the product a “spicy” but “tasty” alternative to traditional dressings.