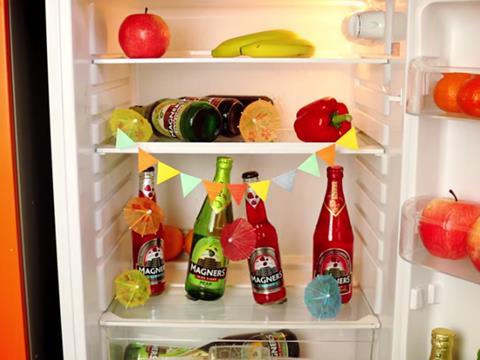 Magners owner C&C Group’s (CCR) profits took a tumble thanks to competitive pressures, FX challenges and one-off costs in its Irish homeland over the last year, its latest results reveal.

However, it hailed a better performance in Great Britain, where sales of its flagship lager Tennent’s were up 5% despite flat volumes, and sales of Magners grew 9% over the second half of the year. Wholesale had also grown customers by 2%, with wine revenues from its wholesale business “particularly strong” at 4% growth.

Its Scottish business had “excelled this year”, said C&C CEO Stephen Glancey, thanks to a standout performance for Tennent’s. The brand drove share growth and revenues up 5% driven by “continued investment in social media, sponsorship and new fount roll-out programme”.

“Our Tennent’s wholesale distribution business in Scotland also performed strongly. Customer numbers, volumes and revenues were all up, driven by the Group’s procurement scale helping deliver value to customers and excellent service levels.”

Meanwhile, C&C had “significantly strengthened its route to market in the UK” with the acquisition of Matthew Clark & Bibendum, the UK booze wholesalers it snapped up “quickly and opportunistically” from the collapsing Conviviality last month, said C&C, as well as the purchase of pub company Admiral in December 2017.

Matthew Clark & Bibendum enjoyed “unparalleled on-trade market access, a wide range of supplier relationships” and was “supported by a skilled and loyal employee base”, said Glancey. “Significant progress has already been made in stabilising the business.”

It has appointed David Philips, formerly finance director of Matthew Clark from 2007 to 2015, as MD. C&C said Philips would bring “a wealth of knowledge and experience which will be invaluable in re-establishing a robust control environment and moving the business forward to best meet suppliers and customer expectations”.

Stock levels at the beleaguered wholesaler were “returning to normalised levels”, said C&C. ”The support we have received from all stakeholders demonstrates the unique and valued position this business occupies within the UK hospitality sector.”

C&C announced earlier this week it had reappointed Michael Saunders as CEO of Bibendum, alongside former COO and CFO James Kowszun. Wine trade magazine The Buyer has reported C&C plans to run Matthew Clark and Bibendum largely as separate entities – before its collapse, Conviviality had spent some eighteen months combining the two in search of efficiencies.

Matthew Clark & Bibendum, while “still operational” prior to its acquisition, had ”clearly been operating under financial stress for some weeks and stock and service levels were significantly below normal”, said C&C. ”Since that time, through the incredible hard work of all Matthew Clark & Bibendum and selected senior C&C staff and the significant support of its customers and suppliers, we have made great strides in getting this high quality business back on its feet.”

Craft beer proved another strong point for C&C, with volumes of trendy and super-premium brews surged 41% across its portfolio. Volumes of its Italian brew Menabrea were up 53%, and of Belgian lager Heverlee 35%. The portfolio had been further strengthened by increasing C&C’s investments in Dublin craft brewers Five Lamps and Somerset-based Orchard Pig cider, said Glancey.

The group also reported “good momentum” throughout the first year of its distribution deal with AB InBev (ABI) – the brewer handles its cider portfolio in England and wales.

It had been “a significant year of progress for the group,” said Glancey, both in terms of strategic development as well as improved underlying performance, with expectations, and we are confident in our outlook,” adding trading for March and April had been in line with expectations.

Like-for-like sales rose 2.8%, driven by air passenger travel and a strong performance in North American and the Rest of the World regions.

Like-for-like sales in the air sector grew more strongly than in rail driven by the continued growth in air passenger numbers. SSP Group said trading in the rail sector “remained softer”, but it still expects like-for-like sales of between 2%-3% for the full year period.

Additionally, the acquisitions of TFS in India and Stockheim in Germany added 2% to revenue

The boost in margin meant underlying operating profit rose 32.6% at constant currency to £55.2m, up 29% at actual exchange rates

SSP Group also said it was seeing an “encouraging pipeline of new contracts”. It warned that ongoing increases in food and labour costs are likely, however the structural growth opportunities in the travel sector and its own operational improvements will help mitigate these pressures.

Kate Swann, CEO of SSP Group, said: “SSP has delivered another strong performance in the first half of 2018. Operating profit was up 32.6% at constant currency, driven by good like-for-like sales growth, significant new contract openings and further operational improvements. We have continued to grow our presence across the world, particularly in North America and Asia and our new business in India is performing well.

“Looking forward, the second half has started in line with our expectations and whilst a degree of uncertainty always exists around passenger numbers in the short term, we continue to be well placed to benefit from the structural growth opportunities in our markets and our programme of operational improvements.”

Elsewhere, Diageo has launched and priced US$2bn of fixed and floating rate bonds.

Proceeds from this issuance will be used for general corporate purposes.

The leisure sector has been hit by a profits plunge at pub group Mitchells & Butlers (MAB) this morning, which is down 10.6% so far today to 246p.

Premier Foods (PFD) moved up 0.6% to 38p over the day, despite rising as high as 4% in early trading following its announcement of 3.6% sales growth for 2017-18. Early positivity settled back down, with some analysts suggesting the company would struggle to continue growth amid expected cost-cutting to marketing.

Catering specialists Compass Group (CPG) jumped up 2.2% to 1,559p, after the company was upped by broker Bernstein on Monday, with its price target lifted from 1,650p to 1,750p.