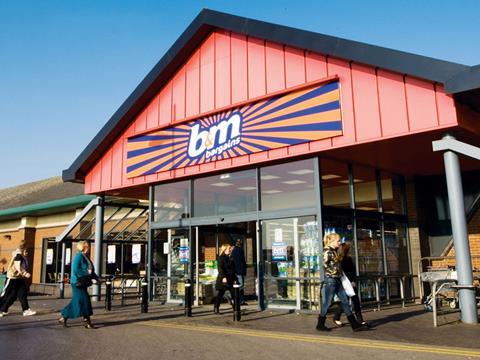 B&M Bargains has been a rare beacon of hope for the beleaguered UK high street, but investors gave the group’s annual results the cold shoulder this week despite its stellar growth.

B&M European Value Retail (BME) sales were up another 17.1% to £3.5bn in the year to 30 March and such is its recent growth that the chain has been linked with a takeover of Asda after the collapse of the latter’s merger with Sainsbury’s. B&M’s CEO Simon Arora dampened talk of an Asda approach on Thursday, saying the retailer “does not need” M&A to fuel growth, but investors were more concerned about signs of a slowdown in its core business.

Its UK business seemingly continues to go from strength to strength, with sales up 8.7% to £2.8bn as it benefited from 44 new net store openings in the year on top of the 39 opened in the prior year. Like-for-like growth was a more modest 0.7% compared with the 4.7% organic growth in the previous financial year, but like-for-like sales were back up 5.8% in the fourth quarter despite the lack of Easter trading.

However, its international business, which was added to with the acquisition of French business Babou in October, continues to disappoint. German arm Jawoll saw 6.7% revenue growth to £213.7m, but margins reduced as it continued to clear old slow-moving stocks and made an EBITDA loss of £10m.

Elsewhere, Majestic Wine (WINE) shares were heading back in the right direction after it admitted it was in talks with “a number of parties” over the sale of its retail network. Reports this week suggested Majestic is closing in on a £100m sale of its entire UK estate, with private equity firm OpCapita named as a potential buyer.

The group said it had received a “number of expressions of interest” and would continue to “review all options” to raise capital from its retail and commercial businesses to accelerate growth of Naked Wines.

The advent of the sugar tax has accelerate the consumer t4rend towards its core of low and no sugar brands, with Pepsi Max a standout performer and all three of its core GB stills brands in growth.