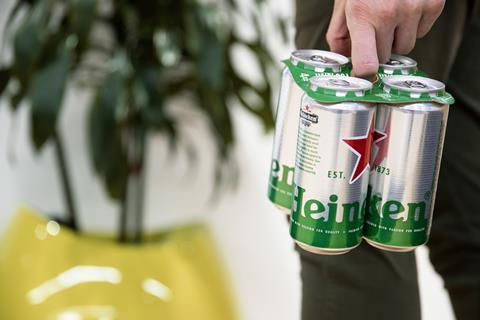 Global brewer Heineken has reported a 16% first half revenue slump amid “unprecedented volatility and uncertainty” caused by the coronavirus outbreak.

Announcing its headline first half results before the official announcement on 3 August, Heineken said its first-half net revenue declined by 16.4% on an organic basis.

It experienced a 13.4% drop in total consolidated volume and an organic decline of 3.6% in net revenue per hectoliter.

It said the impact of the COVID-19 crisis deepened in the second quarter of 2020. After a low point in April, volume started to gradually recover into June as lockdowns were lifted around the world and customers restored depleted inventories.

Beer volume was most affected in the Americas and Africa, Middle East and Eastern Europe regions with a decline in the mid-teens due to full lockdowns in Mexico and South Africa, followed by Europe with a high-single digit decline, whilst Asia Pacific showed the highest resilience driven by Vietnam.

The Heineken brand performed well in relative terms with a 2.5% decline. The brand grew double digits in 14 markets, including Brazil, China, the UK, Poland, Germany, Ivory Coast and South Korea.

Heineken 0.0 grew double digits with growth across all regions and with particular strength in the US and Mexico.

In Europe off-trade, beer volume grew in the mid-teens and market share increased in key markets. However, given Heienken’s strong position in the on-trade and the structural differences between channels, operating profit was disproportionally affected as on-trade outlets were closed for a large part of the second quarter.

Overall operating declined organically by 52.5%, while net profit slumped by 75.8%.

Heineken will take exceptional costs of around €550m of impairments on tangible and intangible assets in the first half, leading to a reported net loss of around € 300m.

However, the group said it has taken significant cost mitigation actions leading to an overall decrease in costs for the first half of 2020 and will “further intensify its focus on costs”.

“Heineken has entered the crisis with great brands, and a dedicated and talented workforce. The company has a strong balance sheet as well as undrawn committed credit facilities,” the company stated.

Under the Agreement, BHC and Cottisford will have equal ownership of a newly incorporated JV vehicle, Tusmore Collection Limited into which each party has committed to invest up to £1m.

The venture has been established specifically to set up and operate a new distillery and bonded warehouse within the grounds of the Tusmore Park Estate in Oxfordshire, which is owned indirectly by Cottisford.

The Company currently produces over 4 tonnes of the finest British honey per year from its 150 beehives of which 120 are operated under licence from Cottisford at the Tusmore Park Estate. Part of the development will include the installation of a honey extraction plant where Tusmore honey will be processed before packing by BHC at it Worminghall distillery.

The agreement will allow the company, to work closely with Cottisford to develop an exceptional premium whiskey brand, drawing on the name and reputation of both BHC and the Tusmore Park Estate, together with an opportunity to create further Tusmore-branded products in the future.

British Honey and Cottisford expect to start work on the renovation and construction of a bonded warehouse and the distillery in the Park Farm building complex immediately. This work is expected to take 18 months and the first whiskey should be produced in August 2021.

Tusmore Collection will have a board of 4 directors, comprising two each from BHC and Cottisford – initially, these directors will be Michael Williams, Robert Porter-Smith, Wafic Said and William Heard.

Tusmore will lease premises from Cottisford under a 20 year lease agreement on open market terms.

Commenting on the agreement, Michael Williams, CEO of British Honey, said: “This JV is an important milestone for British Honey, not only in terms of further developing our strong relationship with Cottisford but also for the commercialisation of our new Tusmore whiskey brand and the establishment of a second distillery and bonded warehouse which is key to increasing the company’s scalable infrastructure.”

Retail technology firm Eagle Eye Solutions said it has grown revenues in the year ended 30 June 2020 “despite the challenges of operating in a global pandemic”.

It said it had continued to deliver for its major clients, win new business both domestically and internationally, and innovate the product as the need for digital engagement accelerates for retailers.

Revenue increased 21% to £20.4m despite the impact of the COVID-19 pandemic on our non-grocery clients and delays to new business decision-making.

It said this growth in revenue has been driven by several significant customer contracts secured in the prior year moving to the transactional phase, and increased transactional revenues from existing customers, demonstrating their growing use of the AIR platform.

Growth in revenues combined with a continued focus on managing the cost base and releasing investment into the business in line with revenue growth, has resulted in a significant improvement at the adjusted EBITDA level.

The group generated adjusted EBITDA of £3.3m, an increase of 359% on the prior year figure of £0.7m, ahead of revised market expectations.

In May 2020, it signed significant new extensions with existing customers, Sainsbury’s and ASDA, “demonstrating the value of AIR to large retailers, sitting at the heart of their customer engagement programmes”.

It said the COVID-19 pandemic continues to impact mainly non-grocery clients, which currently represent approximately 10% of group revenues on a monthly basis, although it is now starting to see a recovery in F&B issuances as UK lockdown lifts.

“While new business decision making is likely to continue to be delayed during this period of uncertainty, our sales pipeline continues to grow, and we are engaged in positive discussions across multiple geographies,” it stated.

CEO Tim Mason commented: “It has been a busy and successful year for Eagle Eye, as we continued to grow while simultaneously managing the impact of COVID-19. As our business has become more international, we have worked hard on our culture, connectedness and collaboration which has served us well and we will exit the pandemic as a stronger business.

” The pandemic has highlighted the need for retailers to digitally engage with their customers in a new world where social distancing is the norm and we believe will cause an acceleration of the digital transformation of loyalty, promotion, and gift markets over the longer-term. With flagship US and Australasian clients now gone live, an expanding partner network providing us with an enhanced offering and an increasingly powerful platform, we believe we are well positioned to support the digital transformation of retail marketing.”

Like for like sales increased 4.3%, while it had an 8.9% sales growth contribution from a 10.7% rise in selling space.

Net retail sales for its Pyaterochka and Perekrestok brands increased by 15.6% with LFL sales growth of 4.7%. Sales growth rates and LFL sales have accelerated in July, with month-to-date LFL sales at Pyaterochka exceeding 10%.

It said LFL sales by traffic and basket in the second quarter reflected the impact of the COVID-19 lockdown with less frequent customer visits to stores and larger purchases per visit.

This meant the company’s supermarket revenue was below budget targets, as COVID-19 lockdown measures included the closure of some shopping malls where supermarkets are located. Meanwhile, free-standing Perekrestok supermarkets enjoyed 24% sales growth in Q2 2020.

X5 expects Q2 2020 EBITDA margin to be above Q2 2019 level which was the highest level since Q2 2017, owing to strong quarterly sales led by its convenience segment, continued improvements in operational efficiency and better EBITDA margin for online operations driven by changes in the structure of demand during the COVID-19 lockdown.