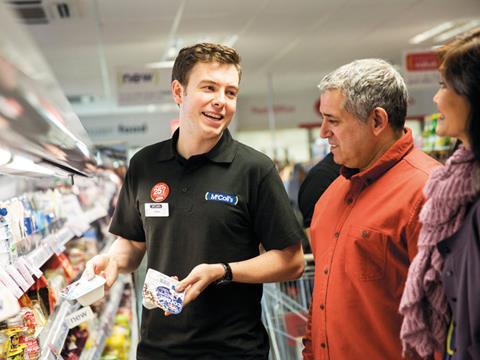 This morning the Met Office issued an amber warning, telling citizens to avoid too much exposure to the sun as the heatwave roars on. The dark days of November seem a long time ago, but another announcement this morning – this time from McColl’s – had us harking back to before Christmas.

Its interim results for the six months to 27 May covered a period of “unprecedented disruption”, according to CEO Jonathan Miller. The source of this disruption was the collapse of P&H on 28 November. It was, at the time, one of McColl’s two key distribution providers.

Overall sales at McColl’s grew almost 20%, but this was mainly due to the integration of 300 stores it had previously bought from the Co-op. The P&H impact was felt in the convenience retailer’s bottom line. Profit before tax almost halved, falling from £4.5m in 2017 to £2.3m, as supply costs increased.

Miller admitted today the fallout from the P&H collapse was “unlike anything he had experienced in his almost 30 years in the business”.

The retailer had to scramble around to shore up supply. This put pressure on its other partners, Nisa and Morrisons, with which it was set to begin a managed switch of supply in January. The 700 P&H stores were not set to migrate to Morrisons until the second half of this year – but that all had to change in a hurry.

McColl’s has now almost completed the transfer of 1,300 stores to Morrisons supply. The 300 former Co-ops will follow in 2020.

This was set to be a year in which McColl’s was going to deliver stellar growth in both sales and profits as it integrated the former Co-op stores and also became the first retailer to sell the revived 400-strong Safeway own-label range.

Miller described Safeway’s performance as “fantastic”. Own label sales in the stores with the new range are up 5%. This, he said, was without really setting about marketing it properly yet – something it is set to kick off imminently now the P&H chaos has passed.

Given McColl’s had previously predicted a 40% boost to profits following the addition of the former Co-ops the damage caused by the P&H collapse is clear to see.

It is also, of course, still being felt at Costcutter, which lost around 400 stores and was made vulnerable to being acquired on the cheap by the likes of Co-op and the tobacco giants, which pumped millions into trying in vain to keep P&H afloat.

Miller said the turmoil in the convenience and wholesale sector suggested the decision to switch to Morrisons has been vindicated. “It was absolutely the right decision.”

McColl’s seems to be coming out the other side in relatively good shape, but today’s results are a reminder of how seismic the events of last November were for the UK grocery industry. They should serve as a warning to all operators to remain on their guard.