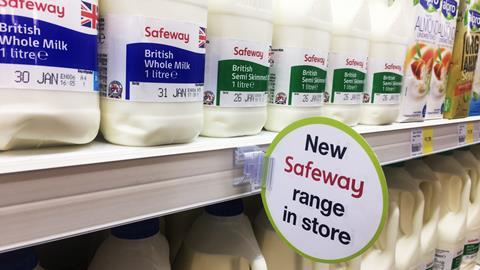 McColl’s turnaround can finally begin – and Safeway will be crucial

“In approaching 30 years in the business I have never known a year as challenging as 2018.” That was the verdict from McColl’s CEO Jonathan Miller today as the convenience retailer announced pre-tax profits for the year had plummeted 57% to £7.9m.

The cause of this annus horribilis was the collapse of Palmer & Harvey at the end of November 2017. The wholesaler that supplied 700 of McColl’s 1,600 stores, as well as tobacco to the entire estate, went into administration, two days into McColl’s latest financial year.

The retailer was without a delivery of tobacco for a week – quite a challenge for a business in which tobacco represents 38% of all sales.

McColl’s had been planning a phased switch of its supply from both P&H and Nisa over to its new distributor, Morrisons. This was to happen over the course of 2018, but circumstances dictated that 1,300 had to be switched to Morrisons supply by the summer. The other 300 are part of a separate supply deal with Nisa until 2020, at which point they will also move over to Morrisons.

This was a massive upheaval for McColl’s – although it has to be acknowledged that the decision to move to Morrisons was one of the straws that broke P&H’s back.

Miller says all of its energy over the past year has effectively been spent on crisis management, rather than the “good retail basics” it had been planning after it ended the previous year in “great shape”.

However, the good news for Miller is not only that 2018 has finally been and gone – it’s that there are some green shoots starting to peak through.

Overall like-for-like sales for the year to 25 November were down 1.4%, but the final quarter was flat and like for likes were up 1.2% for the first quarter of its 2019 financial year.

This is an encouraging start, but there’s still a lot of hard work to be done.

Greg Goodwin joined the retailer from Booker as head of buying in November and has been tasked with leading a category by category range review. Pricing is another area which it is still working through, and perhaps most significantly there’s the Safeway range.

McColl’s is working towards selling more grocery and alcohol than tobacco. Grocery and alcohol has grown from 32% to 34% of its overall sales in the last year, with the 350 Safeway lines playing a role in this progress.

However, Miller noted in today’s results presentation that “the accelerated transition to Morrisons supply led to a more rapid launch of Safeway than we had originally planned, and constrained our ability to fully establish and promote the new range. As a result of this, and some challenges with availability, we have yet to see the meaningful increase in overall store performance that we would ultimately expect.”

The quality of the products in the range are clearly an improvement on what McColl’s previously had, and allows it to start talking more about sellable qualities such as provenance.

However, the branding is actually quite understated, and it’s debatable whether it has the wow factor of rival supermarket own-brand offerings, in particular that of the Co-op. It’s ironic McColl’s is actually selling Co-op own brand in the stores still supplied by Nisa.

How successfully it can build the Safeway brand, therefore, could very well determine how much better this year will be.