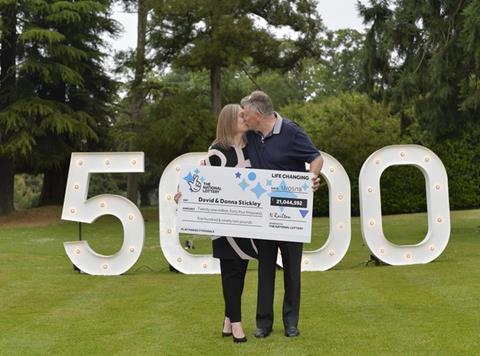 Camelot credited a “wide ranging strategic review”, conducted in 2017 for the increased ticket sales which meant around £30m a week was raised for good causes, bringing the total raised to date to more than £39m.

Draw-based games were up by £39.9m to £1,960.7m, boosted by the introduction of a Tuesday draw for Thunderball and the launch of a new EuroMillions HotPicks game, earlier this year, it said.

Sales across the National Lottery’s range of scratchcards and online instant win games also rose by £136m to £1,495.6m, while transactions across digital channels grew to a record £831.4m, an increase of £77.4m.

This was driven by a better game range and mix, improved merchandising and the launch late last year of a full version of the Android app, Camelot claimed.

Mobile sales also increased by £99.8m to an all-time high of £431.6m, with purchases through smartphones and tablets now accounting for over 50% of all digital sales.

However, retail remained the largest channel where 75% of all transactions were made.

“Thanks to the work we’ve been carrying out following our comprehensive review of the business, we’ve made a very positive start to the financial year across the board,” said Camelot CEO Nigel Railton.

“While there is much work still to do - and while we’ll continue to face challenges that are beyond our control, such as economic uncertainty and unrelenting competition from both the gambling sector and industrial-scale society lotteries that operate on a national basis - I’m very encouraged by the further progress we’ve made over the first half of this year. I’m confident that the strong foundations we’ve put in place and the exciting plans we have lined up will help us deliver even more for our players and the millions of people for whom National Lottery funding is so crucial.”