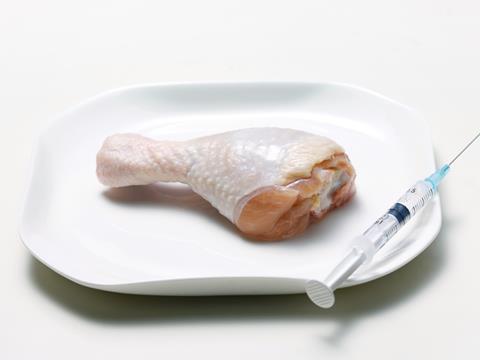 “Extremely high levels” of e.coli resistant to essential antibiotics have been found in chicken and pork sold in British supermarkets, according to a Cambridge University study.

Almost a quarter of chicken meat samples tested as part of the study were found to contain the ESBL e.coli strain - resistant to ‘critically important’ modern cephalosporin antibiotic - up from 6% in a similar study last year, while high levels of resistance to two other important antibiotics were also found.

The research, commissioned by campaign group the Alliance to Save our Antibiotics, looked at 189 UK-origin pig and poultrymeat samples from Asda, Aldi, the Co-op, Morrisons, Sainsbury’s, Tesco and Waitrose.

The study results provided further evidence the overuse of antibiotics used to mass medicate livestock on British farms was likely to be undermining the treatment of e.coli urinary tract and blood poisoning infections in humans, claimed Emma Rose of the Alliance to Save Our Antibiotics.

“These findings show the level of antibiotic resistance on retail meat to be worse than expected. Supermarkets must now publicly commit to polices which prohibit the routine mass-medication of groups of healthy animals, and take immediate steps to reduce farm use of the ‘Critically Important’ drugs.”

Insufficient resources were being put into the surveillance of antibiotic resistance in farm animals and retail meat, said study leader Mark Holmes of Cambridge University.

“We don’t know if these levels are rising or falling in the absence of an effective monitoring system,” he added. “These results highlight the need for improvements in antibiotic stewardship in veterinary medicine. While some progress has been made we must not be complacent as it may take many years before we see significant reductions in the numbers of antibiotic-resistant bacteria found in farms.”

However, pharmaceutical industry body Ruma questioned the link between antibiotic use in animals and antibiotic resistance, with chairman Gwyn Jones pointing out that resistance in humans remained “largely attributed to human medical use”.

“Despite this, the farming industry must also play its part to control spread of resistance. This is why Ruma announced in May it is setting up an industry taskforce to look at how meaningful targets can be developed to replace, reduce and refine antibiotic use in UK agriculture. That group is now being formed and a first meeting will be held shortly.”