Quarter of mushrooms rack up 800-plus food miles, research shows 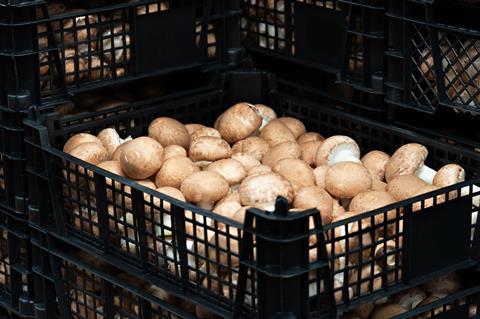 A quarter of all fresh mushrooms sold in UK supermarkets have travelled in excess of 800 miles, according to research by grower body the Mushroom Bureau.

This was despite UK and Irish growers having the ability to supply the entire market, suggested the bureau’s new Miles Better report – which aims to help consumers better understand the journey their food goes on from field to fork.

UK retailers source about 75% of their mushrooms from UK and Irish growers. However, a further 13% are sourced from farms based at least 800 miles away, mainly in the Netherlands, with 12% sourced from mainly Polish farms up to 1,100 miles away – which can take up to 36 hours to reach the UK.

With the environmental impact of food supply chains in the spotlight, the report’s findings raised questions about why UK retailers were importing mushrooms “rather than supporting local”, said the Mushroom Bureau.

Its position was reinforced by a poll of 1,500 UK adults for the report, which revealed 48% of shoppers admitted they’d bought food native to the UK and Ireland, assuming it had been sourced here, only to discover later it had been imported. A further 37% said they’d pay more for locally sourced food.

Irish mushroom producers set to move production to the UK

“Food miles contribute negatively towards an effort to develop sustainable farming, which coupled with supply chain costs (both financial and environmental), represent an easy win for retailers,” said the report.

“Choosing to stock UK and Irish produce over counterparts from eastern Europe and beyond will reduce food miles, carbon footprints and provide the local producer support shoppers crave,” it added.

Stocking more locally sourced mushrooms would also give UK supermarkets “the maximum shelf life as a result of their minimal food miles from farm to shelf”, the report claimed.

“This study highlighted just how little many people know about where the food they routinely buy is from,” said a Mushroom Bureau spokesman.

“But interestingly, it also shows that – when given the choice – consumers would choose local over imports,” he added. “The UK and Irish mushroom industry produce enough mushrooms to supply the whole of the UK’s supermarkets, as well as meet consumer demand all year round, without the need to import from countries like Poland – delivering fresher, better mushrooms with lower carbon footprint”.

Responding to the report, Tesco said 90% of its mushrooms were sourced from the UK and Ireland, while Morrisons sourced 100%. Sainsbury’s did not return The Grocer’s request for comment, while Asda, understood to be the biggest mushroom importer out of the big four, referred The Grocer to the BRC.

Retailers imported mushrooms “to ensure consumers have access to the volume, price and quality they demand”, said BRC director of food and sustainability Andrew Opie.

Read next: What would a ‘Canada-style’ trade deal mean for British food?