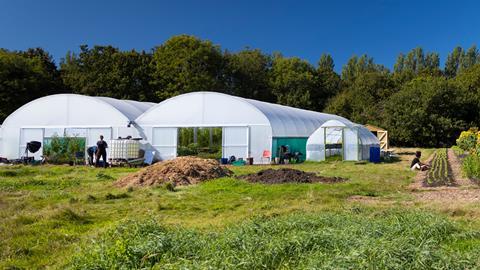 Sitopia Farm: a utopian idyll of farming… in inner London

Sitopia Farm, near Woolwich, is based on ‘the simple premise that by valuing food we value life’. So how does the farm close the gap between production and consumption in its urban setting?

It’s a small farm. About two acres, give or take. But all the staples are here: a ramshackle mix of barns, a family of chickens and sheep, and a plethora of organic fruit & veg. Crates of tomatoes gather by the polytunnels, wheelbarrows clank through the open gate, and sunflowers stand proudly in the autumn breeze.

Surprisingly, we’re in inner London, just a 30-minute drive from Canary Wharf. As city workers go about their business just a short hop away, this urban farm teems with life of its own. Bees swarm among the poppies, butterflies drift through the cabbage patch, and a dozen volunteers work serenely among it all.

Sitopia Farm is the brainchild of Chloe Dunnett, a former senior civil servant, who has found her calling among the crops. The farm initially launched in a disused primary school before Dunnett crowdfunded £80,000 to establish this larger site near Woolwich.

By existing within Britain’s largest metropolis, Sitopia Farm is challenging the traditional ideas of what a farm should be. Why must big, rural, and efficient be the way? Why not small, urban, and sensual?

“Sitopianism is based on the simple premise that by valuing food, we value life”

Dunnett named the farm after Carolyn Steel’s ‘Sitopia’ – a book published last year that laid out the author’s philosophy for an alternative cultural attitude towards food. “Sitopianism is based on the simple premise that by valuing food, we value life,” she wrote.

“By changing the ways in which we produce, transport, trade, cook, share and value food, we could transform our landscapes, cities, homes, workplaces, social lives and ecological footprint.”

It’s Sitopia Farm’s embodiment of this principle that makes it special. Through its volunteers, its work with local primary schools and its farm shop, the farm wants to close the gap between production and consumption. “People are integral to it all,” says Dunnett. “They are the farm and why it’s here and what it’s about.”

The farm is a harmonious celebration of food, flowers and people. The staples are all here: carrots, courgettes, leeks. As are the premium goods like chioggia beetroot, red Russian kale, and cavolo nero. From each of the volunteers, there is a conspicuous charm and bonhomie.

The farm is a revelation for any of us who typically favour the humdrum convenience of the local supermarket. Not only in the farm’s diversity of produce – tatsoi, achocha, and cucamelons are all grown here – but in its taste. The sorrel’s appley acidity is lip pursing, the beetroot hits with an earthy bitterness, while the succulent spinach cries out for an olive oil vinaigrette.

Flowers are celebrated as much as the food, with sunflowers, nigella damascene, and goldy doubles all gracing the site. “I want it to be beautiful as well as productive,” says Dunnett. “Although if we were doing this purely for the money, I’d grow nothing but flowers.”

Just five months after its first seeds entered the ground, Sitopia Farm is now producing around 150kg of food a week for local restaurants, grocers and its pop-up farm shop. Its small scale might suggest high prices, but Dunnett says it is roughly equivalent to a supermarket’s organic range. A 200g pack of cherry tomatoes costs about £2.50, for example, with a discount available for those on low incomes. “This is definitely not Borough Market,” she insists.

Dalila, another volunteer, picks fresh carrots for the farm shop

Buckshorn plantain emerges ahead of the new season

Over 25 varieties of heirloom tomatoes are grown on the farm

Flowers are celebrated as much as food at Sitopia

For Sitopia volunteer Robert Mann, the farm is a riposte to Britain’s existing food culture, in which high-quality ingredients are the preserve of the very wealthy. Unlike in countries like Italy – where delicious, locally sourced produce from farmers’ markets is widely affordable – “if you go to a food market in Marylebone then be prepared to drop gold coin”, he says.

Sitopia Farm isn’t going to change the world alone. In fact, tucked away behind a ‘harvest and apple festival’ on the main road, many passers-by wouldn’t even know it was there. Nor is it shouting from the rooftops about its new carbon reduction scheme, the latest way to maintain soil health, or its revolutionary use of poo.

It’s a farm that recognises farming is about more than just producing high quantities of food. It’s about community, wildlife, eating, and flavour. “This farm is never going to feed the world,” says Dunnett. “But we could have more just like it. A network of local farms supplying local people with great quality food.”