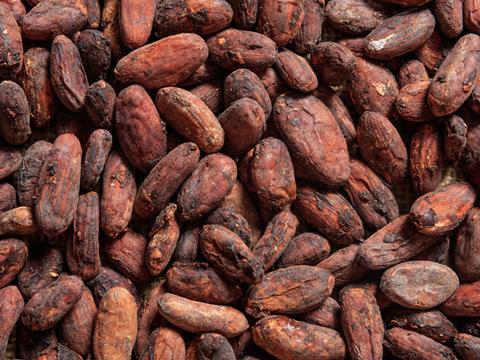 Supermarkets should compel chocolate manufacturers to stop using unsustainable cocoa if they are serious about ending deforestation, a new report has claimed.

Many retailers have sustainability and traceability commitments on their own-brand products, but are failing to pressure other brands to end their unsustainable practices, according to a Lumina Intelligence report.

It argues all supermarkets must start by joining the World Cocoa Foundation’s initiative – a collaboration of 35 leading cocoa companies and the governments of Ivory Coast and Ghana – that is working to halt deforestation.

Tesco, Sainsbury’s and Marks & Spencer are currently the only supermarket members, providing financial contributions and participating in policy discussions.

“But if they wanted to go much further, they could pledge that by 2025 they will only stock brands that are completely deforestation-free,” said Oliver Nieburg, sustainability analyst at Lumina and the report’s author.

Such a move would pressure chocolate manufacturers such as Mars, Lindt and Mondelez to end deforestation in their supply chains in the next five years or face delisting. A 2017 report by Mighty Earth revealed that many manufacturers were unwittingly buying large amounts of illegally grown cocoa in West Africa.

Companies in Europe could eventually be mandated to ensure they are not fuelling deforestation. A study for the European Commission, released last week, suggested legislation could be introduced to make supply chain due diligence a legal requirement for all brands sold in Europe.

Certification schemes currently embraced by retailers, such as Fairtrade and Rainforest Alliance, were failing to prevent deforestation, according to Nieburg. Farmers in Ivory Coast still only received about $1.50 a day on average last year, leaving many impoverished and more likely to expand their production through deforestation.

Supermarkets must now step up and take on more responsibility to address the issue, he said.

“Chocolate brands and suppliers are starting to engage more closely with their farmers on the ground, but retailers are much more removed from it all.”

The Rainforest Alliance echoed a similar message last week as it released changes to its certification policy ahead of a comprehensive relaunch in June.

The new standard will enforce stricter audit rules and greater traceability to encourage all accountability across the entire supply chain.

“It is critical that all participants in the cocoa industry – producers, companies, governments, NGOs, and others – take a more active and permanent role in tackling these issues,” said Alex Morgan, chief markets officer at the Rainforest Alliance.

Edward Millard, Rainforest Alliance director for Africa and South Asia, previously told Reuters there was “jiggery-pokery going on” that made it difficult for companies to guarantee they were buying certified cocoa.

“You do the best you can, but there are risks in any system of verification.”

“Retailers are collaborating to tackle deforestation and drive up standards for responsible production in their supply chains by working with suppliers, NGOs and industry groups.”