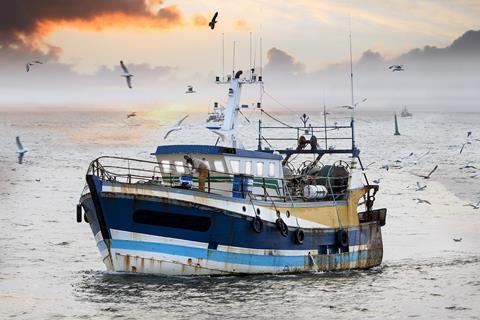 There is ‘low resilience’ in the fishing sector as storms over the winter months saw many vessels confined to port, according to the NFFO

Plummeting prices are putting the UK catching sector under pressure amid the coronavirus pandemic, industry figures have warned.

Year-on-year prices have dropped by more than a third at auctions still operating across the UK, according to industry body the National Federation of Fishermen’s Organisations.

Exported species, such as monkfish and hake, are particularly affected, industry sources have suggested.

At one fish auction in the south of England, the price of cuttlefish – usually sold to France and Spain – was down 26% in March compared to February. Meanwhile, brill – a member of the turbot family usually caught as bycatch – saw its price fall 41% over the same period.

British fishing boats export most of their catch to Europe and Asia, where markets have been most affected by lockdowns to control the spread of the coronavirus outbreak.

The situation had led some fishermen to voluntarily tie up their vessels to avoid landing catches that could crash prices further, the NFFO added.

It also comes at a time of particular “low resilience” in the sector, as storms over the winter months saw many vessels confined to port, warned NFFO CEO Barrie Deas.

“The economics of the industry were in a very fragile state before coronavirus. [Now] costs are ongoing but there are no earnings to set against them and that can only have one result, which is insolvency,” said Deas.

“I’m getting calls from fishermen who are quite desperate and looking for support to keep their heads above water. People are looking to the government to plug the gap. It would be absolutely incredible if they just let us sink.”

Deas said he understood a Defra package for the industry was currently awaiting approval from the Treasury.

It follows a report in The Grocer last month which found supply chains for domestically caught fish were being hampered by a lack of air transport.

Seafish, the public body that supports the UK seafood industry, said it had been working with retailers in an attempt to get more UK landed fish onto shelves. But despite a willingness to do so, retailers needed time to make the switch, said Seafish’s director of corporate relations, Hazel Curtis.

“Supermarkets have high standards of production and safety – it’s not that UK suppliers don’t have those but if they’re not certified and don’t have external assurance, supermarkets are not going to compromise,” said Curtis.

Other prohibitive issues which would need to be resolved include the cost of putting together a new supply chain and a lack of fresh fish processing facilities in the UK. “The processing lines are completely different. A lot of adjustments have to be made to get fish from British vessels finding their way into retail in enough quantity that’ll make it worth going to sea,” Curtis added.

Meanwhile, major processor Birds Eye has told The Grocer its own international fish supply chains have not been majorly impacted by the coronavirus pandemic.

“We are not experiencing any disruption to our fish sourcing – our global suppliers are able to meet our demands as needed, but clearly, we are reviewing the situation constantly,” said general manager Steve Challouma.

Challouma added Birds Eye’s fish lines had seen boosted demand since the outbreak, with fish fingers recording a notable increase in sales thanks to the closure of schools to most children.

In the month of March, volume sales of the product went up 51%, according to Birds Eye figures.