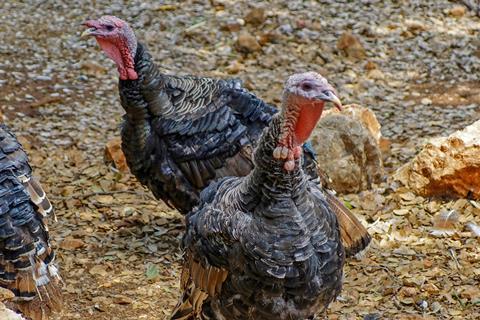 A slump in egg production caused by this summer’s heatwave could lead to a shortage of turkeys at Christmas and more expensive birds, growers have warned.

Soaring temperatures in France had caused “dramatic” problems at breeder farms during the past week, said British Turkey Federation chairman Paul Kelly, leading to concerns not enough birds would be produced in time for the crucial Christmas period.

The UK turkey sector sources about 25% of its eggs from French breeders, which are then transported to UK hatcheries.

However, egg supplies from France were about 10% down on expected levels - representing about 2% of the total UK turkey market - with temperatures as high as 44˚C in France leading to “huge amounts” of eggs being lost.

“It’s been a bit of a nightmare. We’re seeing a massive shortage of eggs at the moment,” Kelly said, with breeders across the UK struggling to source enough eggs to fulfil supermarket orders.

Farms were due to hatch their eggs to meet the demands of the Christmas season by late August. But if the heatwave continued, concerns over tight supplies could become even worse, he warned.

It comes as Aldi last week said it had placed its “biggest ever” order of Christmas turkeys, with 430,000 lines due to go on sale in the discounter. This figure was up 12% on last year’s levels, with the retailer understood to be placing a big emphasis on premium birds.

However, the increase in orders did not reflect a wider growth in the ­market, Kelly stressed.

“It’s a very mature market, and one which was already tight this year as supermarkets were trying to cut down on wastage by buying fewer birds,” he said.

“But if this French egg shortfall continues, there could be some big problems on the supply side within a few weeks.”