A kaleidoscope of colour: how switching the lights can increase sales

Installing LED lighting saves a fortune on bills. Everyone knows that. Yet talk to Munish Datta, the head of Plan A and facilities management at M&S, and he will suggest something different; that use of LED lighting could be so effective at tempting customers into making a purchase that retailers could end up making more money from extra sales than by slashing bills.

“The ice looks crisper and clearer, it sparkles. And with the fish it picks out the blue and makes the eyes look sharper”

Last December, speaking at the Energy Performance Summit hosted by 2Degrees, Datta revealed the results from post-occupancy studies, first carried out at the flagship M&S eco-store in Cheshire Oaks. These showed stores lit by LED became “far more attractive” for consumers to shop in and the “impact on a sales uplift may ultimately be far more than the value of direct savings from putting in LED.”

It sounds like a huge win-win, though given the massive savings realised by any retailer switching to LED (which have been well documented since The Grocer launched its Switch The Lights campaign in November) it’s a very bold claim indeed. So is it credible? And if so, how does it stack up?

“If you walk past some food and it looks fresh, and you are drawn to it, then you are more likely to buy it. If it looks flat and stale, you’re not going to,” says Oliver Bryant from Philips, which has just released the latest addition to its LED portfolio called Light Recipes.

The name reflects the way scientists at Philips combined colours to create tailored light to alter customers’ perception of the food they are looking at. Bryant uses Instagram filters as an example, saying a picture of a blue sea taken in natural sunshine might look gorgeous, but altering the shade of blue on a smartphone with a filter can make it look even more attractive.

“When we were developing it the team put lots of food under different lights, tweaked it here and there, adding colour chips to bulbs and taking them away,” he says. “And, after a lot of experimentation, they arrived at the best combination for each particular food.”

Technically speaking, Bryant says what Philips is doing is “controlling the spectral power distribution curve” - which means picking the precise amounts of colour they want from the kaleidoscope available - to create startling colours in food when the resulting combination is shone on them.

“The most basic way to describe it is if you want to make a red apple look good, we can create an LED with more red in it to bring out the red in the apple and make it stand out. We are mixing different colour temperatures to create light and tailor recipes depending on the colour of the end product, which makes them more vivid, so your eyes are drawn to them.”

Pressed for the best examples, Bryant says fish counters - illuminated with black, blue and white - look fantastic. “It makes the ice look crisper and clearer, it makes it sparkle. And with the fish, it picks out the blue and removes the grey and it makes the eyes look sharper.”

He believes bakery is the best example, however. “If you put bread under standard lighting it looks washed out and flat. It lacks texture and depth, it looks dry. But if you put it under a light recipe designed for bakery, with warm yellow hues and tones, croissants look vibrant, dark and moody - there is drama and texture and the food looks warmer and more inviting.”

It’s a beautiful description, but money talks louder. In a trial conducted by Philips with a supermarket in Germany, when they were lit by Light Recipes, sales of selected fruit and vegetables in the fresh produce department immediately jumped up by 4.7%. 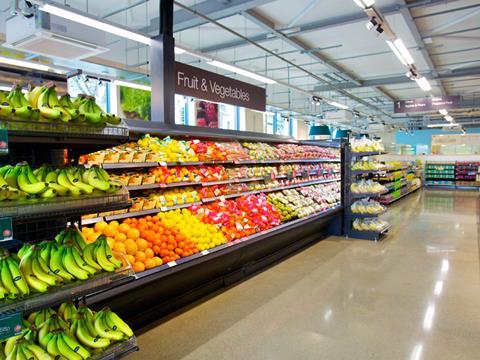 It’s all about making the colours “pop,” says Jennifer Sewell, field marketing manager at LED specialists Zumbotel, which carried out a laboratory study alongside consumer insight consultants Gruppe Nymphenburg to measure people’s responses to lighting in shops to establish three things: the most effective lighting concepts for retail; how to present goods perfectly; and how to increase the customer’s sense of wellbeing.

“Light has a major unconscious impact on people,” says Dr Hans-Georg Häusel of Gruppe Nymphenburg, who developed the ‘Limbic Model’, which studies the “complex emotional personality structures” of shoppers.

Häusel took 48 consumers, put them in a 3D shop simulation in a laboratory, and bombarded them with 20 different “ambient and accent lighting features, colour temperatures, contrasts and light quantities.”

“Again and again we find that the importance of lighting at the PoS is dramatically underestimated,” he says. “Instead, the focus is on fancy packaging and shop design. But actually, the goods on display will only touch people’s emotions if they are set centre stage through light.”

He also claims “even the affective signals emanated by the shop itself are strongly influenced by light,” by which he means if customers feel at ease inside a shop, and perceive the lighting scene as attractive, they will be motivated to stay for a while, notice more products, and buy them.

And those extra sales are the most important thing to the supermarkets, says Bryant, who is showing off Philip’s new light recipes at EcoBuild next month, even more than the savings on offer.

“The product has only been out for eight weeks, which was the peak time for retailers, so we are now starting to have conversations,” he says. “And the key driver for retailers is about the look of the products and keeping them looking fresher for longer. Even more than how much money they can save by installing LED lights in the first place.”

LED and best before dates

“People buy less food when they perceive it to have changed colour,” says Oliver Bryant from Philips. “Even though it’s fresh, people won’t buy it and the supermarket gets a high level of stock churn.”

UV lighting can accelerate colour change in fresh food, but LED doesn’t. And that means if you use LED, then “food looks fresher for longer,” says Bryant. “Put meat under a red LED Light Recipe it makes customers perceive it as looking fresher. The difficult bit is whether you change your ‘best before’ dates to accommodate that, because ‘best before’ dates are just a recommendation that discolouration is factored into.”

So has Philips got to a stage where it can claim that LED can officially extend the shelf life of a product?

“Not yet,” admits Bryant. “It’s the ultimate aim, but we are still at early stages. But we will say a product can stay on the shelf for longer because it’s not ageing as fast because it’s not under UV light, so shops don’t have to take products off the shelf before the ‘best before’ date, which does happen in some instances.”

When tested in lab settings, Bryant says Light Recipe extended the shelf life of sliced meats by up to 30% compared with conventional lamps.