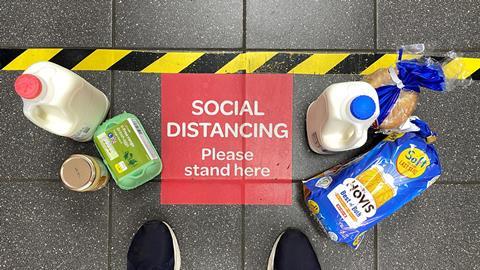 Grocer 33: How supermarkets responded to the coronavirus in-store

The annual Grocer 33 competition has tracked store performance throughout the coronavirus pandemic. So how have they fared?

The Grocer’s annual mystery shopping competition – the Grocer 33 – concluded last week. On the surface the results were predictable: Asda won the award for price for the 23rd year running. Tesco, meanwhile, won both the service and availability awards for the second year on the trot.

But just over halfway through the competition, the conditions under which the retailers were working were hit by the coronavirus pandemic.

First, shelves were stripped as shoppers were gripped by panic buying. Then, as lockdown was introduced, supermarkets had to introduce new procedures and implement new layouts to ensure the safety of staff and shoppers – with queues forming outside in car parks; hand sanitiser stations upon entry; and inside, new one-way systems, stickers on the floor, and Perspex screens at checkouts.

So how did the supermarkets perform before, during and after lockdown? Using our army of mystery shoppers, the Grocer 33 has chronicled the extraordinary response by the supermarkets to the unprecedented conditions in which they were forced to work.

As the first stories of the coronavirus in Wuhan emerged in early January, there were no signs of panic among shoppers. Even when the first cases emerged in the UK in February.

That all changed in early March. During the mystery shop on 8 March, large gaps on shelves in some stores were reported. However, stockpiling was targeted at only a few lines, including pasta, rice, tinned food, hand sanitiser and toilet paper. Sainsbury’s even managed to provide a full basket.

But then came the storm. By the shop on Friday 13 March, availability was so bad the winning Tesco store had 15 of 33 products missing, with the winning Sainsbury’s store having 18 lines out of stock the week after. All categories were affected.

One mystery shopper said she sympathised with shop floor workers who “needed to show a lot of patience” and seemed “a little shell-shocked”.

As the situation worsened, the supermarkets had to get a grip on panic buying. The first to introduce rationing was Tesco on 8 March, with sales of certain food and household items restricted to five items.

Others followed suit that weekend, though Morrisons held back for some days as CEO David Potts worried any limits would act as targets, worsening the problem.

By 19 March, however, supermarkets were rationing most or all items, with restrictions only easing in mid April as supplies stabilised, aided by a dramatic promotions cull: from 38,514 on w/c 2 March across the leading full-assortment supermarkets (Asda, Morrisons, Ocado, Sainsbury’s, Tesco and Waitrose), promos more than halved to 18,838 on w/c 6 April.

As supermarkets struggled to replenish shelves, store opening hours were also reduced – notably at Asda and Tesco, which closed their 24-hour stores overnight from 17 March – to give workers time to restock.

Cafés and counters soon started to be shut down to minimise risks and free up staff to focus on stock control, while retailers also began announcing protected shopping hours for the elderly and vulnerable, as well as priority queuing for NHS workers.

On the day lockdown was announced (23 March), Morrisons revealed plans to install Perspex screens to shield checkout operators in its stores – swiftly followed by rivals.

In the tumult, The Grocer considered pausing the Grocer 33. The competition was clearly at odds with the government’s decree that only essential shopping trips were permissible, while our scoring system was not able to measure the conditions meaningfully.

However, we felt it important to chronicle the extraordinary scenes in the UK’s supermarkets, capturing the bravery and hard work of frontline workers.

So, after a one-week hiatus, the Grocer 33 methodology was relaunched, to reflect the efforts supermarkets were making.

As well as rationing certain items, the most important step for supermarkets was arguably to reduce promotions. First to react was Waitrose, halving the number of promotions from 3,765 w/c 2 March to 1,836 by 16 March [Assosia]. That had a demonstrable impact on its availability, which at 95% was the highest of any retailer during the lockdown, and helped it to match Tesco’s availability percentage across the full year.

“Promotional changeover takes a huge amount of resource from partners in our shops and supply chain, so while maintaining the multibuy promotions that run throughout the year, we temporarily reduced the number of additional promotions to free up partners for keeping shelves stocked with food and essential items,” recalls Simon Burdess, Waitrose director of selling and service delivery.

As well as its availability score, Waitrose also scored higher than any other retailer over the lockdown on car park and shop floor service, as well as queuing times, checkout score, and indeed total score.

Burdess believes its strong performance was aided by its ability to recruit colleagues from the John Lewis department stores, which had closed. While all other supermarkets recruited temporary workers from all walks of life and industries, John Lewis colleagues were already well-versed in the importance of customer service.

“The need to pull together to get through what’s been the most demanding circumstances any of us can remember has brought out the very best in us as a co-owned business and I am so grateful to all our partners for everything they have done.”

Ultimately, the strong showing from Waitrose during the lockdown did not change the results of the annual Grocer 33 competition. Tesco prevailed in terms of service, and in fact increased the number of wins it recorded year on year from 15 to 20, with the highest average score in 12 of the 14 metrics used. It also won the separate availability award (despite Waitrose matching its availability percentage) thanks to a higher availability score and a greater number of full baskets.

Tesco UK & ROI CEO Jason Tarry paid tribute to “the effort and lengths our colleagues go to to deliver on our core purpose of serving our shoppers a little better every day”.

“In the last few months in particular they have been extraordinary. I’m delighted these efforts have been recognised by The Grocer in winning the service and availability awards for the second year in a row.”