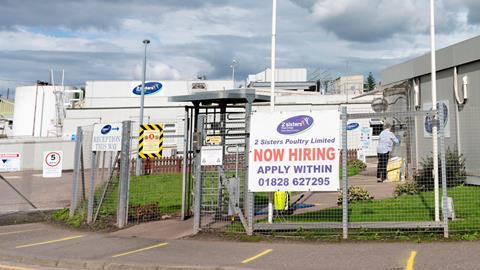 What’s causing the number of outbreaks to increase?

Hopes the Covid factory outbreaks that hit the industry in June were a blip have proved optimistic.

And despite industry leaders insisting they are not an indication of intrinsic issues with food production, there’s growing anger amid worker safety concerns.

So what is causing the outbreaks – such as Saturday’s at Banham Poultry’s Norfolk plant – and could more be done?

“The fact we didn’t have these outbreaks in March shows this is not something particular to food factories,” says Andrew Kuyk, director general of the Provision Trade Federation.

“In fact food factories are probably among the most well regulated and safest environments in the UK. What we are also seeing now is that these incidents have been occurring in all sorts of different food factories, whereas initially they appeared to be confined to meat factories. “Rather than the theory seized on by some animal welfare groups, that this was a failure of the UK’s food policy, the incidents are much more to do with the general easing of lockdown and the fact people are coming in contact in social situations.”

BFFF CEO Richard Harrow agrees: “The outbreaks appear to be the result of social interaction outside food plants. A proportion of the people who work in food factories live in large households or shared accommodation and this has been identified as a key way in which the virus spreads.”

“There have also been cases of people car sharing to get to work plus there’s been a general relaxation of the rules that have allowed us to socialise more freely and it’s natural that people will get together with work colleagues once the working day is over.”

“But the food industry has done a remarkable job and spent a load of money protecting staff. Everyone I know of has taken appropriate steps and made changes to their sites because it’s the right thing to do.”

“The big thing is about the to and fro in these factories in terms of transport and accommodation but also the conditions. In chilled meat factories, there’s lots of people in close proximity, in cold conditions, whereas in ambient, they’re in well-ventilated spaces.”

Union bosses are concerned on two counts: first, they believe low-paid workers, under pressure to earn money for their families, are refusing to self-isolate.

“Almost all the outbreaks have occurred in ‘unbranded’ companies, who operate on a low wage, high-margin and volume business model,” claims GMB national officer Eamon O’Hearn.

“This model frequently requires labour transported in from surrounding areas because wages are often too low for local workers.

“When combined with little to no company sick pay schemes, this creates a perverse environment where workers cannot afford to be off work.

“Now we have test and trace potentially isolating workers for 14 days with little to no pay, it can only increase the pressure to ignore it, and attend work when they are possibly ill.”

O’Hearn also claims “the guidance from BEIS was updated in mid-May and allowed companies to substantially water down existing practices.”

“Failure to insist on facial coverings, permitting workers to work face to face/side to side without any protection for entire shifts, frequently 12 hours long, is quite possibly the catalyst behind the more recent outbreaks.”

The Grocer understands talks are planned in the next few days between Defra and unions, following calls for a re-think on safety.

Harrow claims the government is doing a better job of tackling the outbreaks than it did at the start of the incidents.

“They have now devolved responsibilities to Local Health Protection Teams and this has helped ensure more prompt and proportional responses to any outbreak,” he says.

“However, there is some concern about who is the lead authority once an outbreak has been identified and which part of government is responsible for helping companies through the response process.”

The food industry is also at the heart of plans to massively ramp up the country test and tracing capacity which earlier this month saw the government announce plans to axe Public Health England, to be replaced by the new National Institute for Health Protection.

Earlier this month food companies were signed up to a trial of a new coronavirus app being tested in the Isle of Wight and the London Borough of Newham.

The app, which follows the high profile failure of a previous trial in the Isle of Wight only, is available in Apple and Google’s online stores, and tells users to self-isolate for a fortnight if it detects they have been close to someone else diagnosed with the virus.

But the food industry has long held concerns that as test and trace apps become ever more part of the response to coronavirus, they could lead to more closures which disrupt the supply chain.

But Jones says: “There is rising concern about different approaches and inconsistencies at local level with significant operations being shut down without a pathway to reopening. The decision to shut down facilities must be taken in balance with the need to avoid disruption in food supply and with due regard for animal welfare.”

Harrow believes the experience of the sector since lockdown has shown it has the resilience to get through the Covid outbreak without shortages of food caused by staff shortages.

But with Covid still far from over and Brexit on the horizon, the scrutiny of the food industry is going nowhere fast.