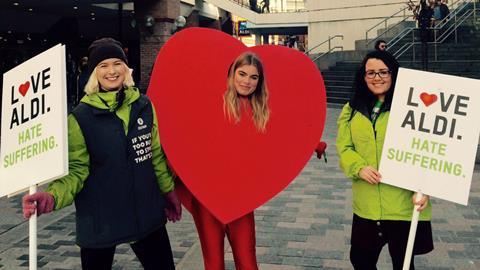 How Aldi is tackling slavery in its global supply chains

If bookies took bets on the supermarket most likely to win an anti-slavery award, they would be forgiven for not picking Aldi.

Just a year-and-a-half ago, Oxfam ranked the discounter the worst supermarket for protecting human rights in the ­supply chain.

The development charity, which bases its assessment on published policies, gave Aldi zero points for, among other things, transparency, safeguards to protect workers’ and women’s rights, and having no senior executives explicitly responsible for ensuring human rights were respected.

Now, it seems, Aldi is doing better. Last week it won the Thomson Reuters Foundation’s Stop Slavery Enterprise Award, beating Coca-Cola, IBM and Charoen Pokphand Foods in the goods and services category, for “its leadership in the fight to clean a high-risk and complex supply chain”.

The award is not the first evidence of Aldi’s efforts since that damning Oxfam ranking. By last summer, it had climbed two places up the table after taking steps addressing two of Oxfam’s key concerns.

The first came with the appointment in October 2018 of a senior international director explicitly responsible for labour and human rights. Oxfam had also criticised Aldi for failing to explicitly commit to UN Guiding Principles on Human Rights. A new human rights policy, published as a result of the appointment, did just that.

Aldi also has “a dedicated ethical trade team in the UK responsible for setting the ethical trade strategy and oversight of day-to-day compliance,” says a spokesman.

One of the ways Aldi polices ethical policy violations is through a whistleblowing hotline for employees and suppliers worldwide to raise any concerns. All reports are fully investigated, says the spokesman, and remedial action is taken “as appropriate”.

‘Alertline’ is independently run and staffed by multilingual call handlers. The details are included in supplier contracts and terms and conditions, to which they must agree. “The service is available 24 hours a day, seven days a week and callers remain anonymous at all times,” adds the spokesman.

In the interest of stamping out supply chain slavery in this country, Aldi is also committed to the British Retail Consortium’s ‘Retailer Protocol for Handling Cases of Modern Slavery in the UK Supply Chain’, the spokesman said.

Launched in November 2018, it aims to ensure cases of slavery in the UK are handled appropriately and consistently across the industry, so lessons can be applied internationally.

The measures are founded on binding contractual obligations for suppliers, contained in a published document called Aldi’s Social Standards in Production, says the spokesman. “We expect our partners to communicate these requirements, in addition to all legal requirements, at the production facilities and monitor compliance,” he adds.

So, does it cut the mustard with Oxfam? The charity isn’t ready to congratulate Aldi on its award just yet, saying there remains “much more to do to ensure the people who produce our food are properly rewarded and protected”.

But it acknowledges: “Aldi has made some important steps towards protecting workers in its global supply chains,” adding: “We will be updating our assessment of all six supermarkets later this year and hope that Aldi will have made further progress.”

What does Oxfam’s supermarket human rights report really tell us?