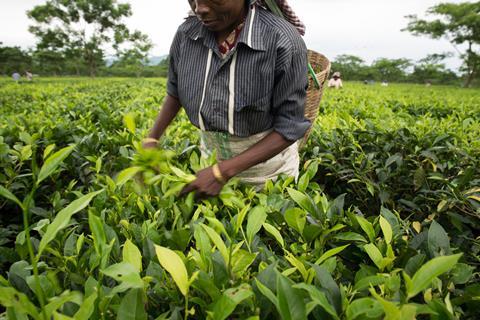 Workers on tea plantations supplying Aldi, Morrisons, Tesco and Sainsbury’s endure inhumane conditions in which cholera is rife, according to new Oxfam research.

Interviews with workers on 50 tea plantations in Assam, India, found most had no access to clean drinking water and many had no toilets. Some 45% reported suffering from waterborne diseases including cholera, diarrhoea and typhoid, and wages were so low that half depended on government rations.

Meanwhile supermarkets and tea brands were taking 49p of the 79p shelf price of 100g of black Assam tea, while workers collectively received 3p, the charity said. Five pence more for workers would mean a living wage, according to Oxfam.

Fruit farm conditions were also highlighted by the research, which claims many women workers in north east Brazil were only able to survive outside harvest season thanks to support from government and relatives. Workers also reported developing allergies and serious skin diseases as a result of using pesticides and other chemicals without adequate protection on grape, melon and mango farms supplying Lidl, Sainsbury’s and Tesco, according to Oxfam.

What does Oxfam’s supermarket human rights report really tell us?

The international development charity is calling for workers to get a bigger share of the shelf price of produce after conducting interviews in India and Brazil and surveys in five other countries. The research is part of Oxfam’s Behind the Barcodes campaign, which ranks supermarkets annually on supply chain human rights.

“Supermarkets must do more to end exploitation, pay all their workers a living wage, ensure women get a fair deal and be more transparent about where they source their products.

“Supermarkets are snapping up the lion’s share of the price we pay at the till but the workers who toil for hours to harvest tea and fruit face inhumane working conditions and are paid so little they can’t even feed their families.”