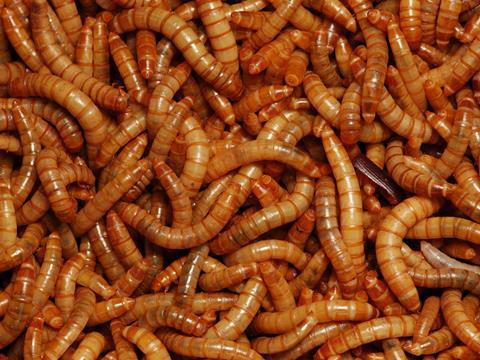 Using insects to feed livestock and fish could slash the UK’s future soy footprint by a fifth, according to a new report commissioned by Tesco and WWF.

The research highlights what it calls the “huge potential for insect farming” in helping to tackle the climate crisis.

‘The Future of Feed: a WWF roadmap to accelerating insect protein in UK feeds’ claims the total demand for insect meal from the UK’s pig, poultry and salmon sectors could soar to around 540,000 tonnes a year by 2050. This could in turn result in as much as 16,000 tonnes of fishmeal and 524,000 tonnes of soy being replaced – the equivalent of Tesco UK’s entire 2018 soy footprint – the report said.

The report reveals around 150,000 hectares of land would be required to produce this amount of soy annually – almost the size of Greater London.

Animal feed accounts for around 75% of soy production, but the report warned cultivation of the crop was fuelling climate change, deforestation and habitat conversion in several key ecosystems, including the Brazilian Cerrado, where more than 100,000 hectares of precious habitat is lost each year to make way for soy production.

As well as reducing deforestation risk, insect farming has the advantage that many insects are biological waste processors, helping to recycle and decompose material, the report concludes.

They can be reared from a vast range of feedstocks, or substrates, and can process surplus food, byproducts and other raw materials that might otherwise go to waste.

Around 240,000 tonnes of insect meal per year could potentially be sourced from UK insect farms, it adds.

WWF and Tesco said they were now are calling on the UK government to mandate the FSA, with input from Food Standards Scotland, to research the potential and regulatory requirements for using additional substrates for insect farming, which could allow a broader range of feedstocks to be used to farm insects.

“Retailers like Tesco and the food industry as a whole have a key role to play in scaling up the use of insect feed, and we’re already trialling its use in our aquaculture supply chain.

“We’re calling on government to build on this report and develop financial incentives to support innovative farming methods, such as insect farming, which will support the scale-up of these new industries.”

Mike Barrett, executive director of science & conservation at WWF, said: “Livestock plays a crucial role in the global food system, but producing feed for the 80 billion animals reared for human consumption each year is putting immense pressure on our planet’s resources.

“We encourage the UK government and retail industry to take urgent action to get environmentally damaging practices out of our supply chains and off our shelves. This includes scaling up the use of alternative proteins such as insect meal and supporting calls for a circular feed system here in the UK.”