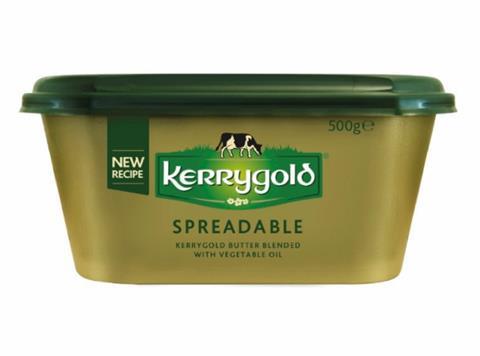 Kerrygold Spreadable has become one of the first casualties of a rationalisation of Tesco’s BSM aisle.

The supermarket giant delisted the Irish butter brand’s spreadable variant at the end of last month.

Brand owner Ornua, which launched Spreadable in the autumn of 2016, said Tesco’s move was “disappointing”.

Its block butter has also been listed as unavailable on the Tesco website since last week. However, the brand stressed it had retained its Tesco listing nationwide.

“As a result of what we understand is a wider range rationalisation of its butters and spreads fixture, Tesco has decided not to stock Kerrygold Spreadable,” said a spokesman for Ornua. “Kerrygold continues to be one of the most popular premium butters in the UK, with consumers loving its unique pure taste, creamy texture and golden yellow colour.”

It comes as Tesco undertakes a major range rationalisation of brands across its business as part of the next phase of Project Reset.

As The Grocer reported last week, the supermarket giant is planning to slash the number of suppliers it works with as part of a sweeping review of its entire supplier base over the next two years.

It is understood it will look at all elements of its “supplier partner capability”, with one supplier telling The Grocer manufacturers were facing a “tsunami” of change as Tesco looked to rely more on selected, long-term partners.

The retailer declined to comment on any link between Project Reset and the BSM reorganisation, but it comes less than a month after Tesco listed four variants of Müller’s new Spreadable range last month, in addition to a Müller-branded block butter previously sold only through convenience retailers.

Kerrygold has been hit by volume decline in the past year, as double-digit price inflation drove consumers from the BSM category. But despite a 7.5% drop in volume sales, Kerrygold increased its taking at the till by almost 10% to £26.2m [Nielsen 52 w/e 21 April 2018].