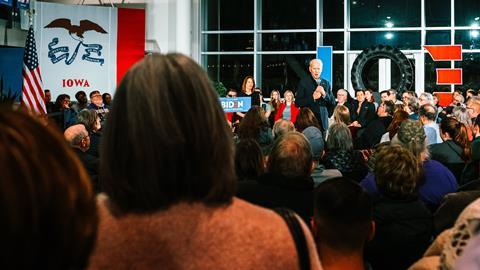 “We are up BIG, but they are trying to STEAL the Election”, US President Donald Trump announced this morning in a tweet subsequently marked as ‘misleading’ by Twitter.

In fact, the president had no proof he was winning the election, nor that there had been any fraud on the part of the Democrats. It was, as he would say, fake news.

With votes still to be counted and Trump threatening to go to the Supreme Court if he loses, it could be several days before we find out who the next US president will be.

It’s going to be a nail-biting wait. And not only for Americans – who appear to be divided almost in half when it comes to whether they think Trump should be given another four years in the White House – but also for the rest of the world, including Britain.

Why? Because while it rankles that the US president is still proclaimed the ‘leader of the free world’, it’s undeniable that US policy has a monumental global impact.

That’s particularly true when it comes to food and drink. Take Trump’s 2018 decision to impose sanctions on Iran – which sent Brent Crude oil prices surging, thus pushing up the cost of transport and raw materials for many products.

Or the the imposition of punitive tariffs on the EU earlier this year, which resulted in UK food and drink exports plummeting to £185m in November 2019, down from £249m in the same month the previous year.

So which candidate would be better for UK food and drink? Well, that’s a tricky one.

It’s generally assumed that if Trump stays in power, we’ve got a better chance of getting a UK-US trade deal over the line quickly. Whether that’s a good thing for British food and farming, though, is still under debate.

What’s more, Trump doesn’t exactly have a track record for putting his money where his mouth is (see his “big, beautiful wall” between the US and Mexico – or lack of). And when it comes to trade, he is unapologetically protectionist.

So his promise to give the UK a “bigger and more lucrative” deal than the EU shouldn’t necessarily be taken as gospel. We might get a deal, but don’t be surprised if it comes with a healthy serving of chlorinated chicken.

The prospect of a Joe Biden presidency, meanwhile, is more likely to be giving UK trade negotiators nightmares. He’s already warned Boris Johnson that the UK must honour the Good Friday Agreement if it wants a deal with the US, a condition potentially threatened by the government’s proposed Internal Market Bill.

Elsewhere, Trump is more likely to prove disruptive to global trade in general. Just look at his efforts to undermine the World Trade Organisation – most recently blocking the appointment of Ngozi Okonjo-Iweala as the next head of the trade body, despite the former finance minister of Nigeria winning the backing of most WTO members.

The downfall of the WTO could, of course, prove handy for the UK if it wants to make up its own rules on trade after Brexit (something Boris Johnson’s administration seems keen on). But it would also threaten to undermine global political and economic stability at a time when the world is facing enough challenges under Covid.

Biden, meanwhile, would likely “spend the first year or two reinstating the US in international bodies, including its presence at the WTO”, Jason Langrish, executive director of the Canada Europe Roundtable for Business, told ITV last month.

That would again no doubt delay a US-UK trade deal, but it would restore some stability to global trade flows, and thus commodity prices.

And while it’s generally accepted a US-UK trade deal would be delayed under Biden, perhaps that’s not a bad thing. It would give the UK time to think carefully about exactly what it wants from a trans-Atlantic deal. And a chance to get its ducks in the row on issues like welfare and food standards.

Even more significantly, a Biden presidency would put more pressure on the UK government to reach a deal with the EU. And that would make a BIG difference to UK food and drink.