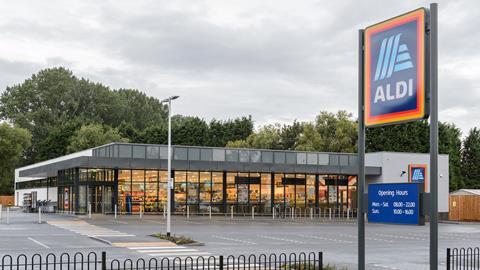 Aldi has always been fiercely protective over its value perception. When Irish startup Buymie launched an Aldi grocery delivery service without its collaboration, the discounter went on the warpath over the price mark-ups. In 2017, the Advertising Standards Authority for Ireland upheld a complaint from Aldi that Buymie’s pricing could mislead shoppers, and the app was changed as a result.

It wasn’t their only falling-out. Buymie had already changed Aldi’s name on the app to ‘German discounter’ after being issued with a cease and desist notice for using the logo. Eventually the acrimonious arrangement ended and Buymie began delivering for Lidl in Ireland instead, this time with the retailer’s agreement.

So it was slightly surprising when Aldi launched its Deliveroo trial in May this year. Yes, Buymie was in Ireland and the Deliveroo is trial in the UK, but the concern – that shoppers could think Aldi prices are higher than they are – would presumably be the same.

As well as a delivery charge of £4.99, Deliveroo adds a mark-up to grocery shelf prices, but does not say how much that mark-up is. So, when a customer comes to check out, they may find their Aldi basket is a little more expensive than anticipated. To undermine value perception is to undermine the whole point of Aldi, and the business has a single UK and Ireland CEO in Giles Hurley.

Aldi’s point of view is that it still offers leading value compared with other retailers on the same platform, and that Deliveroo is established enough for customers to understand how its pricing works. But the discounter nevertheless seems cautious about the mark-up – it won’t even put a percentage on it, claiming it varies too much.

Not only that, but the arrangement will see its customer data shared with Deliveroo, and from there presumably with Amazon, which has a share in the courier business, and recently launched free grocery delivery for Prime members.

Perhaps the Deliveroo trial, now in stores in the East Midlands, London, Cambridge and Greater Manchester, was a quick solution. The challenge would have been this: Aldi’s hard-won market share was falling as it missed out on the online grocery boom enjoyed by the mults. Its share dropped 8.5% from March to June, according to Kantar.

And yet discounters must of course tread carefully. Even the mults find it difficult to turn a profit from online. Discounters must find a way to do it without heaping on costs and complexity. Getting Deliveroo to take care of it is one way. Another is click & collect.

Aldi’s latest trial launched today, initially for staff only at a Midlands store, but with plans to extend it to customers and more locations in weeks.

Customers will be able to choose from the full grocery range through a new, dedicated part of the website, and arrange a time slot to arrive at a collection point in the store’s car park. There will be some costs for Aldi, as staff will have to pick the orders in store – just as they do for Deliveroo – but this will be covered by a click & collect charge.

And while it may not be delivery, having the shopping brought to a car, contact-free and in line with social distancing rules, will ease the minds of many customers concerned about going into a store. After all, it will likely involve no closer contact than having grocery brought to your front door by a driver.

Crucially though, it’s an online operation that promises not to impact thin margins or prices in store. As Aldi sees it, it’s a way of ensuring no customer has to pay for the way another wants to shop.

And it gets to keep hold of its customer data.

If Deliveroo was the quick answer, could it be that this is the more considered one?