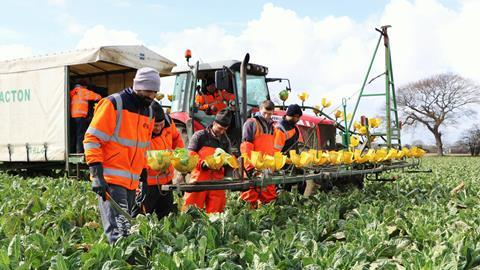 Why is government so apathetic to the labour crisis hitting UK growers?

The labour crisis moved into a new phase for the fruit & veg industry last week, after senior figures revealed it was resulting in unprecedented crop losses.

The latest NFU figures from a survey of labour providers and large businesses at the peak of crop harvesting in July showed the shortage of seasonal workers stood at 34.5% – an astonishingly high percentage.

To put it into perspective, NFU Horticulture and Potatoes Board chairwoman Ali Capper said last week the previous high – recorded in autumn 2019 – was 22%. “You can cope with being 2%, 3% or even 5% short,” she told The Grocer. “But these percentages are too high now. I dread to think what the number in August is going to be.”

What these numbers ultimately mean is crops aren’t getting picked, food isn’t being packed and key farm tasks, like runner cutting on berry farms, aren’t being carried out.

As well as the potentially disastrous consequences for growers, that has big implications for UK food security. But despite providing evidence of the shortages, the NFU and other industry bodies claim the government has yet to respond.

This apparent apathy towards domestic food supply among ministers is troubling, to say the least.

As the host of this year’s crucial COP26 climate summit, the UK should be acutely aware the climate crisis is creating steeper and steeper challenges for food producers the world over.

With the UK currently a net importer of fruit & veg, reliant on countries at increasing risk of extreme climate events – like Morocco, Egypt and Spain – surely now is the time to be bolstering food security by boosting domestic production, rather than letting it go to the wall.

The solutions to this labour crisis are very much in the government’s gift. In a heartbeat, it could both widen and make permanent the Seasonal Agricultural Workers Scheme pilot, taking much of the strain off growers.

So why haven’t ministers acted?

Speaking to The Grocer last week, a government spokesman suggested it needs to gather more evidence on labour supply and demand. Which seems disingenuous, given it’s been clear for more than two years the industry is struggling to get key seasonal staff. Indeed, competition with other industries, like hospitality, foodservice and logistics has meant the rot has extended to permanent staff too.

Clearly, the government sees a decline in the availability of British produce as a sacrifice worth making. But is that really in the interest of UK consumers, who already face empty shelves and have a clear preference for homegrown food? Certainly not.