Lessons from The Grocer's conference on e-commerce 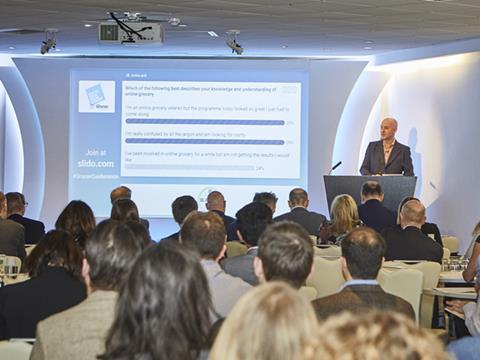 A stellar list of speakers, an action-packed programme, and one of the hottest topics in grocery, The Grocer Conference on ‘How to win in online grocery’ was a sellout. And for those who couldn’t make it, here we cherry-pick some of the lessons we learned from the day.

How big will online grocery get?

Kantar Worldpanel’s Fraser McKevitt, head of retail and consumer insight, revealed that after achieving double-digit growth in recent years, sales had actually slowed, creeping up 9% in 2017, taking share to 7.2%.

He said factors that deterred online grocery shoppers included delivery charges and “inertia of habit”, though the slowdown was also linked to a reduction in marketing spend by some retailers in a bid to make growth sustainable.

A Kantar global study predicted that UK share would rise to 12% by 2025, according to McKevitt, but he added: “I would say on the current rate that looks fairly optimistic.” The potential to get there lay in persuading those already shopping online to spend more.

“The vast majority of people who are shopping online - about 28% of the population - are dabbling,” he said. “They’re spending less than 10% of their share of wallet online.” By persuading this sizable chunk of people to “shift just a little bit” towards spending more, “there is quite a lot of money to be had”.

The role of new technology, services and players: Amazon was clearly a major source of disruption, but key to the online giant’s success was service, not price, panellists on the Amazon Big Debate argued.

James Bate, category leader for Amazon Pantry and Pets, revealed that the record delivery time for its Prime Now service was under six minutes from clicking on the order.

He also stressed the importance of Subscribe & Save, which lets shoppers set up recurring orders in return for discounts on Amazon.

John Maltman, CEO of analytics firm E Fundamentals, said: “Look at Unilever and the things they’re investing in - Dollar Shave Club, Instacart, lots of things going on. Not all of them will work. But it gives them enough momentum to tell investors that in 2022 they expect about a third of their sales to come from e-commerce.”

Lars Johansen, owner of Shobr.com, the Danish site letting consumers order direct from brands, said: “My advice is to be there, make sure you are on a platform that is relevant for the consumer, and where you can do experimental work.”

How voice is transforming search and sales

The conference also debated the impact of voice technology, with panellists agreeing smart speakers were an additional channel for sales alongside established e-commerce.

While voice search was all the rage, however, Google’s Harry Walker, stressed that search is much broader than simply a technology. It’s a proxy for consumer behaviour. And retailers and suppliers needed to pay attention to search results, as they reveal new trends. A search for chicken sausages, for example, ranked 387th three years ago, but sixth last year. “Shoppers will go where they can get a specific product that they can’t find and build their basket around that”.

Viv Craske, from mySupermarket, dismissed content as a red herring versus the importance of understanding spend. But not everyone agreed.

Richard Kelly, from fmcg marketing technology firm Adimo, said its work with Bayer had shown a clear link between relevant content, discovered via search, and sales.”

And Facebook’s Maureen McDonagh expressed frustration that the UK was the most sophisticated in terms of online retail, but behind the curve on digitisation of content.