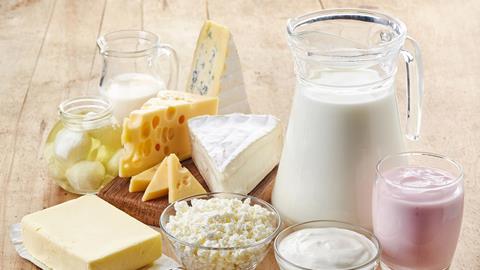 1. Four in 10 bought milk more than once a week during lockdown 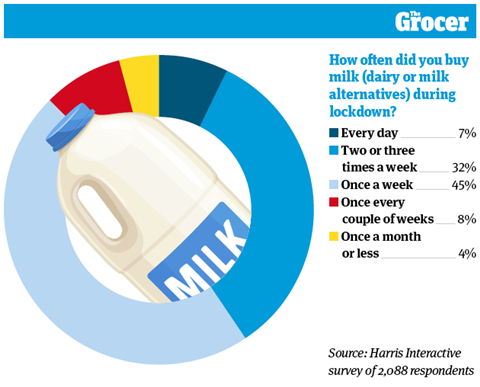 The UK-wide lockdown in spring delivered an immediate boost to dairy sales. Well, in the home, at least. While surplus milk was an issue in foodservice, sales went through the roof in retail. An extra 121 million litres went through the mults, discounters and c-stores in the full year [Kantar 52 w/e 12 July 2020].

That heightened demand was reflected in our consumer survey with Harris Interactive. Four in 10 respondents said they bought milk at least twice a week. Only 12% bought milk less than once a week. “Lockdown brought about more in-home consumption occasions and especially around breakfast, including tea and coffee,” says Courtney Field, brand manager at plant-based brand Beleaf. 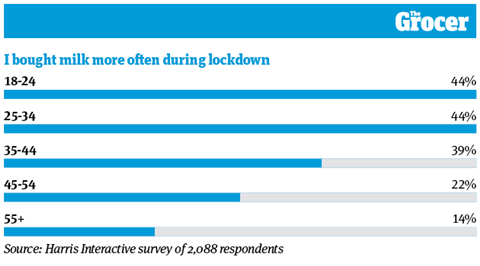 Overall, 29% of Brits said they bought milk more often during the first national lockdown, while 64% bought the same.

That varied wildly by demographic, though. More than four in 10 younger consumers said they had increased their milk consumption during the crisis. That compared with just 14% of over-55s.

Interestingly, the 25 to 35-year-old age group stood out as the most regular consumers. During lockdown, 14% of this demographic shopped for milk every day. That compared with 3% of over-55s.

However, that’s not to say older shoppers were infrequent buyers; 85% of over-55s bought milk at least once a week.

3. Three in 10 bought their milk online 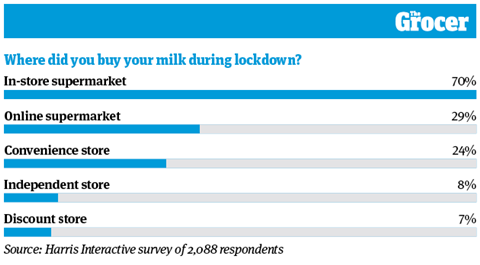 Online shopping took off with a bang in spring. Since then, its share of the grocery market has continued to grow steadily – accounting for 13.5% of all sales in the height of summer [Kantar 4 w/e 9 August].

So it’s not surprising that three in 10 shoppers bought their milk online at some point during lockdown. That’s even higher than the number who shopped at convenience stores, which also emerged as a fast-growing channel during this period.

4. Price remained most important, but was closely followed by shelf life and availability 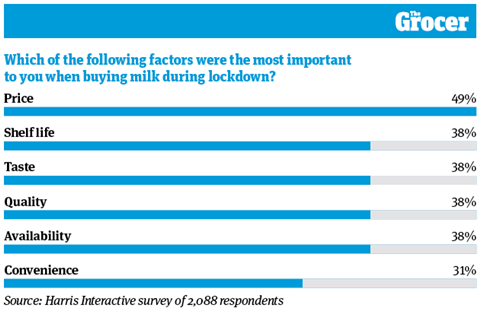 Price is typically a major factor when it comes to buying milk. And that was no different during the pandemic. Overall, half of respondents said cost was a driving force in their purchases.

However, the impact of Covid-19 was clear in other shopper priorities. Availability was deemed just as important as taste, as shoppers remembered the upheaval of panic-buying. Shelf life was also rated highly, as a growing number of shoppers veered towards long-life and filtered milks to avoid trips to the supermarket.

Older shoppers were particularly concerned about shelf life. Among over-55s, 46% rated it an important factor. That compared with just 31% of 18 to 24-year-olds.

5. Almond milk was the most popular dairy alternative 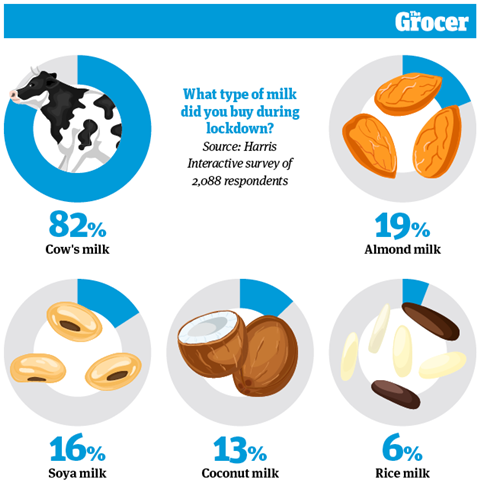 Let’s be clear: dairy is by far the most popular form of milk among UK shoppers. An overwhelming 82% of consumers said they had bought cows milk at some point during lockdown.

However, there are also some encouraging figures in dairy-free. Nearly a fifth of shoppers said they had bought almond milk during lockdown, and 16% bought soya.

Those figures were much higher among younger consumers. As many as three in 10 shoppers in the 35 to 44-year-old age group said they purchased almond milk during the lockdown period. That compared with just 7% of the over-55 age group.

Londoners were also far more likely to have purchased plant-based milk. In the capital, 33% of respondents said they had bought almond milk, and 27% bought soya. By contrast, in the south west only 12% bought almond milk and 17% soya.

Field of Beleaf says it is important to get the taste of plant-based milks right to tempt a larger number of shoppers to the category. “Consumers tell us that taste is still the number one barrier to purchase within the plant-based category so finding the right base is vital to address this issue,” she says.

6. A third would be willing to try a plant-based alternative to milk 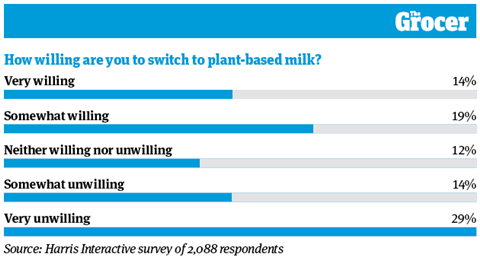 It would be easy to focus on the negatives here. After all, a sizeable 29% said they would be very unwilling to switch from dairy to a plant-based milk.

However, an even higher number would consider the move. Overall, 33% of respondents said they would be at least somewhat willing to make the switch. And 14% would be very willing.

That level of enthusiasm was much higher among the key demographics for plant-based milk, such as younger shoppers. Among 25 to 34-year-olds, 25% said they would be very willing to switch away from dairy. That figure fell sharply to just 5% of the 55-plus age group. 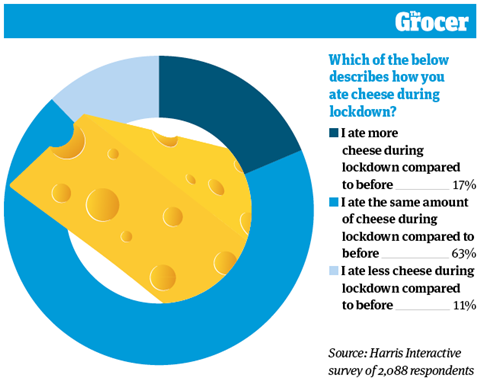 It’s not just milk sales that went through the roof during lockdown. At-home cheese consumption also soared. Sales of cheddar alone rose 10% to £1.5bn over the full year [Kantar 52 w/e 12 July 2020], as households used it for sarnies and snacking.

That increase is reflected in our consumer responses. A fifth said they ate more cheese during lockdown, while 63% said they ate the same amount.

That rise in consumption was particularly pronounced among certain demographics. Younger shoppers were more likely to up their cheese habit. Nearly a quarter of 25 to 34-year-olds said they ate more cheese during lockdown. That compared with just 12% of 55-plus consumers.

8. Four in 10 ate both British and Continental cheese

The stellar rise in cheddar consumption cemented British cheese as the true winner of lockdown. But Continental cheese also saw a boost. According to Kantar figures, an extra 14 million kilos went through the tills in the past year [52 w/e 12 July 2020].

Our consumer poll shows a high number of shoppers ate both continental and British cheese during lockdown. That habit was particularly common in the capital. In London, 49% ate both types of cheese and a similarly high number – 48% – did so in the south east.

Those numbers dropped off outside of the south, though. In the midlands, 62% instead stuck to British cheese and 58% of shoppers did the same in Scotland.

9. Sandwiches were the most popular use for cheese 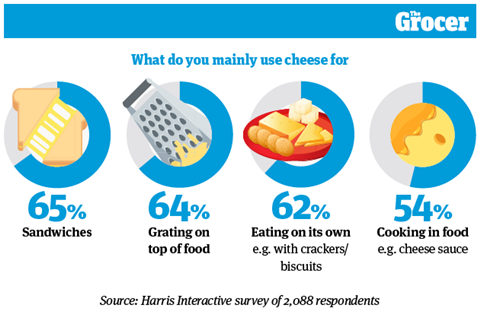 A cheese sandwich is a British lunch staple. So it’s no wonder that sarnies topped the list of uses for cheese. That use was particularly relevant during lockdown, as cafés shut and the number of at-home lunch occasions soared 87.7% [Kantar 4 w/e 19 April 2020].

It’s not just about sandwiches, though. Almost as many consumers grated cheese on top of food, while plenty ate it on its own as a snack.

There were some demographic differences in consumption habits. Women were more likely to eat cheese on its own, for example. Among female respondents, 64% ate cheese this way, compared with 55% of men.

In terms of regional differences, the north east was most likely to eat cheese on its own. Meanwhile, Scotland, the east of England and the south east were most partial to a sarnie, with seven in 10 eating cheese this way. 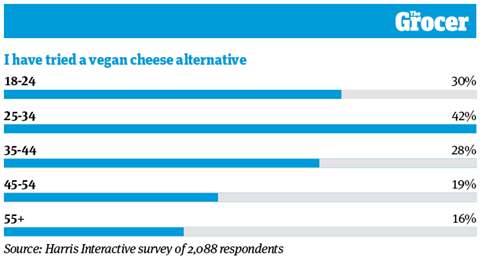 Younger consumers are generally more open to plant-based options, as our previous questions show (see chart six). So it’s no surprise they are also more likely to have tried a plant-based alternative to cheese.

Among the 25 to 34-year-old age group, 42% said they had eaten a vegan cheese. That was far higher than the rate of trial among the overall sample – 25% – and three times the rate of the 55-plus age group.

Trial was also high in the capital. Four in 10 Londoners said they had tried a vegan cheese alternative. That dropped to just 16% in the north east.