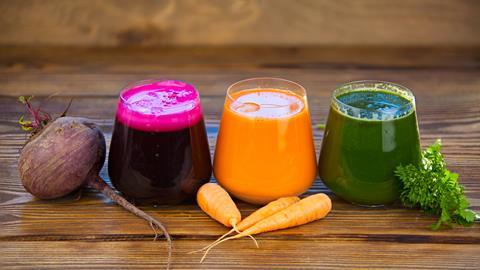 Juice sales have been distinctly underwhelming of late. But there is some good news on the horizon. Younger consumers are buying into juices, while vegetable blends could represent fresh opportunities for growth among certain demographics, our poll of over 1,000 consumers with Kantar’s Research Express service reveals.

1. Over half of young people drink juice at least once a day 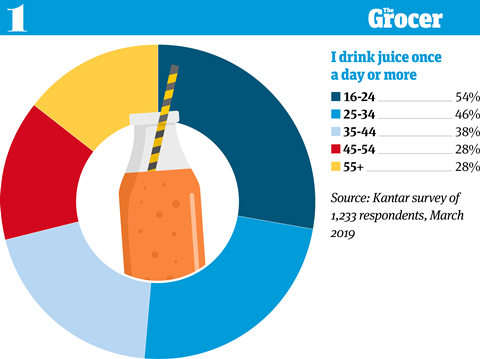 Here’s the first bit of good news: younger consumers are buying into the juices market. Overall, 36% of respondents to our research said they drank juices at least daily. Among 16 to 24-year-olds, that figure rose to a significant 54%. That includes 18% who will drink it more than once a day. Younger people were also less likely to shun juice altogether. While a whopping 23% of over-65s said they never drank it, that figure was as low as 4% among 16 to 24-year-olds. All of which suggests the natural sugar content of juice isn’t deterring younger people from making it a regular part of their diets. If juice continues to attract more younger consumers, it could be in for some healthy growth ahead.

2. Young people are also the most frequent consumers of smoothies 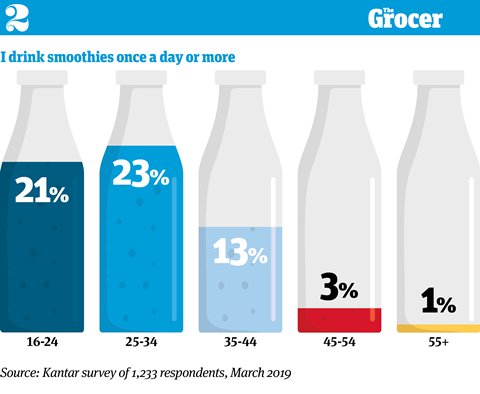 This bias towards younger generations was equally present in smoothies. Over a fifth of 16 to 24-year-olds drink smoothies at least once a day – a habit only replicated by 1% of over-65s. Cawston Press MD Steve Kearns says there is a reason behind this disparity.

“We would expect to see higher percentages of young people drinking juices and smoothies because we know they’re the most adventurous in their drink choices,” he says. “They consume a wider variety of drinks throughout the day, from sparkling waters to soft drinks and even trying out new sectors like kombucha.” By contrast, Kearns says older generations tend to be less adventurous and are “more likely to stick to what they know”.

3. But brands are struggling against own label

Now for a less positive finding: branded juices are struggling. Their sales fell 2.2% in value last year, as more and more shoppers switch to own label. That’s partly down to the rising price difference between branded and own label juices and smoothies, which hit 72p per litre last year [Kantar 52 w/e 4 November 2018]. There is also increasing competition from the retailers, which are bringing out their own premium blends.

Savsé CEO Paul Gurnell warned of the tough branded environment in February. “We’re seeing shoppers switch from premium brands like Tropicana into own label products, namely due to price premiums and the rising quality of own label juices,” he said. “That means brands really need to add value to the market if they’re going to get shelf space.”

4. Branded experimentation with vegetable juices could pay off 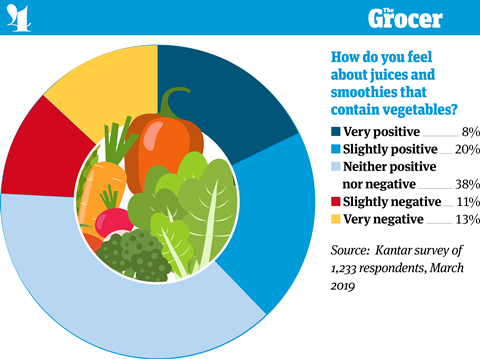 For that added value, brands could do worse than turn to vegetable-based blends. Amid all the concerns about the sugar content of fruit juice, these less sugary options hold an appeal. Almost one in five respondents to our poll said they felt very positive about juices and smoothies containing vegetables, with a further 20% feeling slightly positive.

Those who have taken the plunge into vegetables are reporting positive results. Cawston Press says its beetroot juice has remained popular since it launched five years ago, and organic drinks brand Plenish states its bestseller is Fuel, an entirely vegetable-based juice.

“We’re seeing a growing trend for less sweet flavours across a lot of categories, including juice,” Plenish founder Kara Rosen tells The Grocer. “People want less sugar, which is leading them towards more savoury flavours.”

5. The appeal is particularly high among parents and millennials 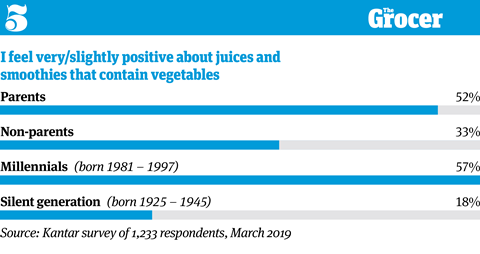 Parents tend to be particularly health-conscious. So it’s no surprise they are especially open to vegetable-based juices and smoothies.

While 46% of parents said they felt either very or slightly positive about the blends, less than a quarter of non-parents could say the same.

“Parents being open to vegetables in drinks comes as no surprise,” says Cawston’s Kearns. “They tend to be more in tune with the nutritional benefits in food and drink, and welcome any way of getting more vegetables into their children’s diet.”

There was also a generation split between younger groups and older groups such as the silent generation, which Kantar defines as those born between 1925 and 1945. Less than a fifth of this generation felt positive about veggie-containing juices and smoothies, compared to nearly six in 10 millennials.

6. However, there is still work to be done on health messaging

Despite this appeal, it’s not as easy as shoving veg into a blender and reaping the rewards. Just 10% of consumers polled said they would be more likely to buy a vegetable-based juice or smoothie than a pure fruit version. So brands will need to convince shoppers of their relative benefits.

Health credentials are one obvious selling point to communicate. Although veg juices were designed to reduce sugar levels, fewer than one in five respondents believe they are healthier than a pure fruit juice or smoothie.

Another way to tempt shoppers is through more adventurous flavours. Just 14% of shoppers described the vegetable-based options on the market as new and exciting. More worryingly, a significant number are not just bored – they are actively put off by the taste. Our poll found 30% of shoppers were dubious about the flavour of vegetable-containing juices.

To win over those consumers and create some more excitement in veggie juices, brands should look to the rising interest in world-inspired flavours, says Julia Buech, food and drink analyst at Mintel. “There’s a big opportunity in the trend for example, particularly in attracting more experimental younger shoppers.”

8. Consumers are more likely to be dubious about green ingredients such as kale, broccoli and spirulina 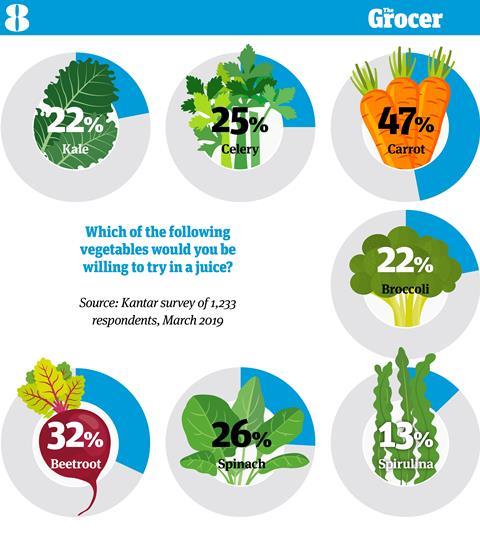 Precisely which vegetables are used in blends could prove crucial. Green veg such as broccoli and spirulina are at the bottom of the wishlist, according to our poll, while beetroot and carrot proved more palatable.

But there is still potential for green blends, argues Cawston’s Kearns, who points to their popularity outside supermarkets. “People are happy to include green veg in the juices and smoothies they make at home or the ones made in front of them in juice bars, but there’s a lack of trust in how the product will taste when it’s pre-packaged in store.”

9. Londoners are most open to trying out celery juice 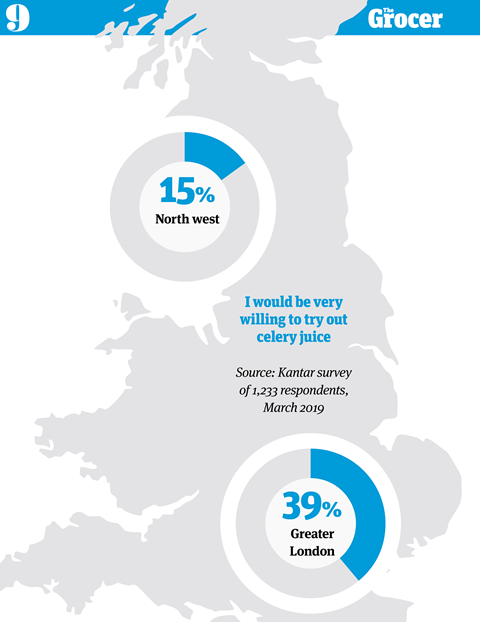 Nowhere is quicker to jump on a social media trend than the capital. Having seen the likes of Kylie Jenner and Gwyneth Paltrow wax lyrical about celery juice, nearly four in 10 Londoners say they would be very willing to give it a whirl.

Other parts of the country are less convinced. The north west is the most sceptical with only 15% of consumers very willing to try celery juice, closely followed by Scotland with just 16%.

The drink also appeals more to the younger generation, which is more likely to have seen social media buzz about celery juice (there are more than 120k Instagram posts using #celeryjuice). A whopping 34% of 25 to 34-year-olds said they would be very willing to try the blend. 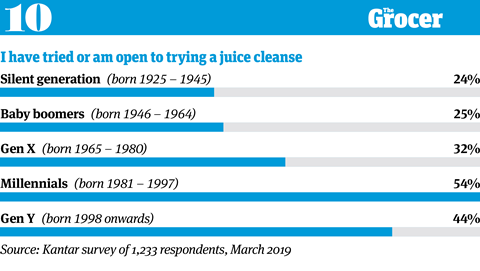 As with the celery juice craze, juice cleanses have made a big impact on social media. So again, it stands to reason that the younger generation would be most open to the idea. Overall, 37% of consumers said they would be willing to try, or had already tried one. That number rose to 57% of millennials, making them a key demographic for the juice cleanse sector.

“Millennials were raised with the juice cleanse trend in the same way that Gen Y is being raised with gut health,” says Kearns. “It’s also important to point out that these products aren’t cheap, so it’s the shoppers that are really invested in the concept that are going to dive in.”