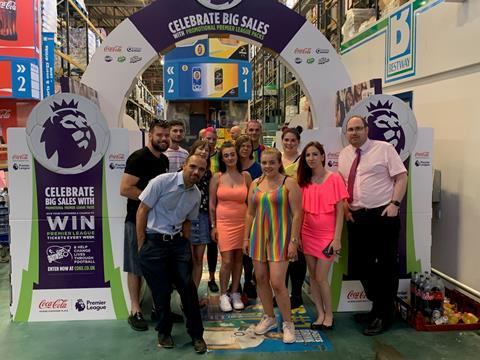 Bestway Brighton dressed up and gave out free samples

Bestway Wholesale’s depot in Brighton has enjoyed a 40% uplift in customer numbers and a 65% increase in sales, during a trade event to help its retail customers prepare for the seaside town’s Pride event this weekend.

Bestway was supported by major suppliers including Coca-Cola, Monster Energy, Lucozade, Red Bull and Kopparberg at the trade day event at the Hollingbury Trading Estate depot on 24 July.

It included “stand-out” deals and free samples on products that sell best in independent stores during the Pride festival, including soft drinks, licensed, tobacco and vaping.

Stuart Shaw, the Brighton depot’s general manager, said the Bestway Brighton Pride trade day was a great opportunity for staff to dress up and have fun, working with suppliers while supporting local retailers.

“A lot of local retailers are located on the Pride parade route and they can all cash in on the number of people who will visit the city over the weekend,” he said.

“We spent about six weeks planning the trade event, drumming up the interest of suppliers and retailers with flyers, emails and face-to-face contact - and thinking of ways to create theatre in the depot on the day.”