Rolling fields of vines stretching across the world’s most expensive wine region may not be the sort of scene you’d associate with Lidl. It’s time to think again. The Lidl group says it snapped up 5% of Bordeaux’s yield for what it’s called its second big ‘claret offensive’. That’s a lot of wine. We sent deputy finance editor Edward Devlin to the vineyards of Bordeaux to investigate… 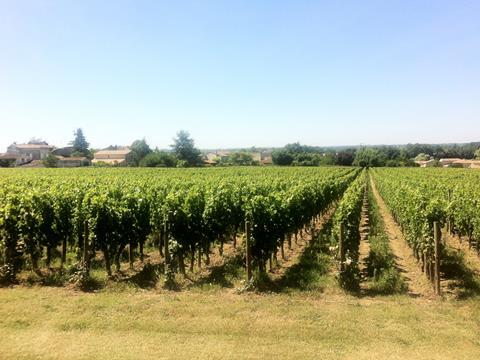 The vineyards around Bordeaux’s Château La Dauphine, which takes a 100% organic approach to wine making

Lidl might have been named Grocer of the Year at The Grocer Gold Awards in June, but it still has its detractors. Some still sniff at the discounters’ wine offerings, dismissing their cut price wines as Châteauneuf-du-Crap. “It’s cheap for a reason,” the boss of one major grocery multiple told me earlier this year. “They just buy up the vintages the French won’t drink.”

“Try it,” says Lidl alcohol buyer Ben Hulme. We’re sat under the blue skies of Bordeaux, drinking a £8.99/bottle of Reuilly Cuvée Prestige. It’s as good as anything you could get in Waitrose or Majestic. Hulme dismisses such critcism as pure snobbery. And he has a point.

“If anyone wants to take issue then I’ll answer that on a case by case issue. But if people want to see what we’re doing, just have a look at the awards we’re winning. There is also the credibility that comes from having an independent panel of masters of wine rating each wine we sell. If they say it is good then you have to take notice. But you can’t please everyone.”

Since joing Lidl in 2010, Hulme has transformed the retailer’s drinks offering, with bold new additions such as a £40-a-pop bottle of red from Château Lagrange last Christmas and a new regional craft ale selection launched in June and promoted by Blur bassist Alex James.

“It is always striking that balance with wines people expect to see but also exciting people; that is how we differentiate the Wine Cellar. A wow factor helped us grow; we now need to keep them engaged. We aim to over deliver on price and quality – offering market-beating value.”

Lidl launched its first claret offensive in the autumn of 2014, the first big campaign of its Wine Cellar concept.  It was the retailer’s most expensive ever product launch at £12m, as it set its sights on tempting more of the middle classes into its stores. The campaign garnered the grocer national newspaper headlines as the media lapped up news of its entry into fine wine.

The promotion also translated into massive sales, with Lidl claiming year-on-year growth of 38% since the introduction of the Wine Cellar, which sits alongside its range of 50 ‘everyday’ wines.

Lidl repeated the promotion again this year, widening its sourcing from Bordeaux to Burgundy, Alsace and the Loire Valley (hence why we’re drinking a Loire Valley wine in Bordeaux) and bringing in greater volumes, with prices starting at £4.99 and climbing up to £16.99 for a bottle of Champagne.

“A year ago I might have brought in 10,000 bottles of one wine, this time it was more like 20,000 or 25,000,” Hulme says. Lidl has almost sold out of the one million bottles it pushed through its stores in the second claret offensive that kicked off last month, stealing shoppers from Waitrose and M&S with tipples such as a white Châteauneuf-du-Pape and the Lussac-Saint-Émilion. 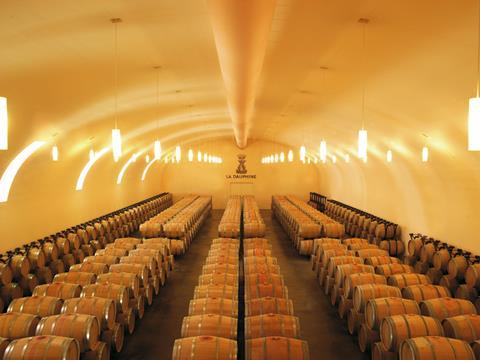 The cellar at the 300-year-old Château La Dauphine, from where Lidl sourced it’s £14.99 Fronsac

“We haven’t just played it safe,” adds Hulme. “It is always about striking that balance with wines people expect to see but also exciting people at the same time; that is how we differentiate the Wine Cellar. A wow factor helped us grow; we now need to keep them engaged. We aim to over deliver on price and quality – offering market-beating value.”

Aldi has also made serious waves in the world of wine, winning 149 awards so far in 2015 for its beers, wines and spirits range, including knocking Waitrose off its perch as Best Multiple Drinks Retailer of the Year at the Harpers Awards. Its premium tier Exquisite Collection, launched in November 2012, also picked up more than 40 medals at this year’s International Wine Challenge. More than 1,000 bottles of wine from the collection are sold every hour, with year-on-year sales up 40%, Aldi revealed as it released its 2014 accounts last month and announced it was set to launch an online wine shop.

Hulme says the next frontier for Lidl is spirits, which is set to be the big focus in the New Year. “We have an extra bay coming into stores in November and we will apply the same philosophy as Wine Cellar of extending out the range and having a rolling assortment of spirits.” 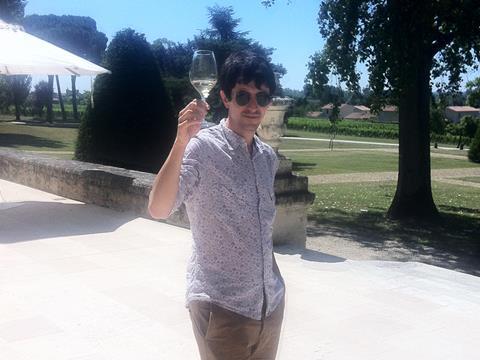 A tough job, but someone’s got to do it… our man in Bordeaux

Its upcoming Christmas promotion, as well as listing 48 new wines, including a Hungarian Tokaji and two Canadian Ice Wines, will feature 26 premium spirits, including a 34-year-old sherry cask finish blended Scotch whisky and a 28-year-old Speyside single malt, which it will sell for a punchy £49.99.

A Black Forest vodka and an “artisan” dry London gin have also been developed by Lidl’s own version of Heston Blumenthal, Michelin-accredited Kevin Love, who was hired in March. Such developments may help silence the critics, Hulme adds.

“Try the wine,” he says. ”Try the beer. Try the spirits. A lot of the criticism aimed at us in the past may have been down to certain perceptions people had in that we were a bit of an unknown quantity [in wine] rather than any serious critique of our products.”

It’s time for the critics to put up, or shut up. 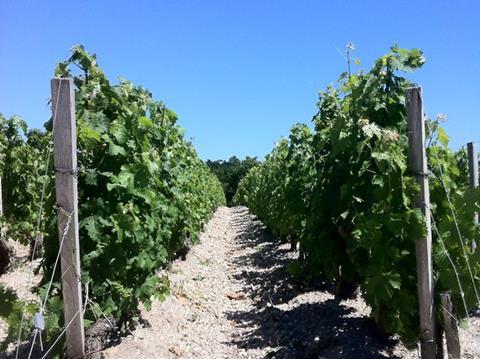 The vineyards of Château Lagrange, where Lidl sourced its £40 a bottle red for Christmas 2014