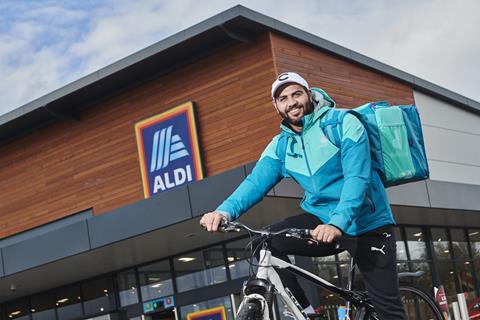 To use the service, customers must live within four miles of a participating store

Aldi is extending its Deliveroo trial to almost 130 stores in time for Christmas.

Most of the additional new stores have already joined the 42 the trial had reached by October, including locations in Scotland and Wales for the first time. In total, 129 are set to offer the service by the end of the year.

It means more Aldi customers across the UK – including in cities such as Bristol, Liverpool and Brighton – can order from around 400 Aldi grocery products on Deliveroo’s app.

Locations added outside England include Aberdeen and Cardiff.

Aldi has been trialling Deliveroo since May. The discounter has also been rolling out its first click & collect service since September, with that trial due to reach 200 stores by Christmas.

To use the Deliveroo service, customers must live withing four miles of a participating store. Delivery takes as little as 20 minutes, according to Aldi.

“That’s why we’ve been keen to extend our trial with Deliveroo to stores in more new areas, and plan to launch our trial of click & collect in more than 200 additional stores between now and Christmas.

“In the past month, we have made the Deliveroo service available in new areas such as Cardiff and Aberdeen, and will continue to monitor feedback of the service closely.”

Deliveroo VP of new business Ajay Lakhwani said: “We are delighted Aldi’s trial with Deliveroo will expand to 130 stores. Deliveroo’s on-demand grocery partnerships have proven vital for so many people during this difficult period, allowing families to get the food and household items they need and want quickly.

“The fast expansion and success of this trial reflects the strong customer desire for groceries on-demand, an area in which Deliveroo is providing increasing choice. We are excited that even more customers across the country can now enjoy Aldi’s great quality food.”