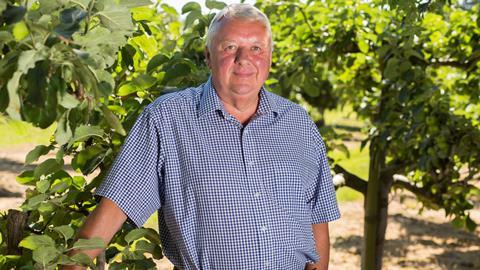 Marston represents an industry worth £1.7bn in retail. He talks Brexit, the next gen and car park polytunnels

Nick Marston cringes slightly when he recalls the early days of British Summer Fruits. For starters, its approach to PR and media left something to be desired. “Growers would dress up as strawberries and, without being unkind, we were delighted if we got a few lines in the Plymouth Argus,” he says.

Today, PR efforts feature the likes of Olympic athlete Jessica Ennis-Hill. She’s the face of a new campaign for Berry Gardens, where Marston was CEO until he joined BSF as chairman in 2017.

The example goes to show just how far the industry – and BSF in particular – has come. Having started out in 1995 as essentially “a UK promotional mechanism run by a handful of farmers”, it’s now a trade body that carries serious weight.

Representing over 95% of UK berry companies and growers who supply retail, it’s the face of a specialist and lucrative sector. While back in the early days, “farms would be either berries and pigs or berries and potatoes”, Marston says most of its members today “do nothing but berries”.

That’s partly because berries have become, quite simply, big business. The industry is now worth £1.69bn in retail, having grown 700% in 25 years. Yields weigh in at 40-50 tonnes per hectare compared with about 10 tonnes in the late 1990s, as the British season has grown from a six-week affair to a period that spans from May to November.

This was made possible by developments such as polytunnnels – something Marston has championed since the mid-1990s. “Everyone said they’d blow away,” he recalls. “Within 10 to 12 years, most production was covered by them.”

As a result, growers no longer need to don a strawberry costume to get attention. Strawberries alone soared to over £772m in retail value sales last year [Kantar], as lockdowns saw more consumers buy into berries than ever. While the initial lockdown saw volume sales of strawberries (+15.8%), raspberries (+23.5%) and blueberries (+9.8%) soar, berries maintained strong sales even into the usually quiet winter months, with volumes up 7.3% in the six months to March [Kantar].

So it should be an unabashed success story of British farming. But amid all this positivity, there is one thorn in the side for Marston and his peers: Brexit. The industry’s reliance on seasonal EU workers is the problem. The government has already faced criticism from Efra over its “last-minute” approach to the seasonal agricultural workers scheme (SAWS). And while Marston says the government is “listening”, he stresses restrictions on movement are the industry’s “biggest concern”.

Best career decision: Joining Kentish Garden as its MD in 1995 to help set up their own in-house marketing company – a move that helped grow the business from £19m in turnover to £360m over 21 years

Worst career decision: I’m very happy to say I haven’t really made one

Business idol: Dr John Randall, who owned Kanes Foods for the 10 years I worked there as general manager and sales director. He showed me the value of clear and decisive action and the need to never fear the consequences of your decisions

Favourite TV show: I’m a bit of a sucker for The Chase

Desert island luxury: A daily supply of berries and some fishing tackle

Hobbies: Driving my Triumph TR6 in historic rallies, golf and fishing for big fish in Spain

The numbers illustrate the scale of the problem. Horticulture says it needs more than 70,000 people to work on farms each year, but the government has only provided 30,000 visas for seasonal workers in 2021. It expects the rest of the workforce to come from those with pre-settled or settled status – but Marston suggests this is unlikely to happen.

“The vast majority of people will only go down that route if they wish to settle here permanently,” he argues. “If you’re here permanently, you’ll want a full-time job, not a seasonal one. We’ll see an increasing need for people to come here on seasonal visas.”

Neither is domestic labour likely to help. Farms have tried to recruit UK-based workers they hired during last summer’s Pick for Britain campaign, says Marston, but have been turned down in many cases as those workers have got their old jobs back.

At the same time, the cost of the workforce has gone up. “The 9% increase in the living wage in 2020 and the extra costs of Covid-19 have squeezed margins. Retailers have to make a margin otherwise they don’t exist, but growers also have to make a margin,” he points out.

In this climate, farms may have to accept the possibility of doing more with less. “More efficient use of labour will be something farms will have to look at,” admits Marston. “We have had the luxury of a hard-working, eager workforce coming here to work seasonally. Whatever we do, and however helpful the government is, the size, experience and ability of it will decline.”

Still, Marston is determined not to dwell on the negatives. Even with the cold and frosty weather this spring, which slowed the progress of crops, he is optimistic about this year’s fruit – forecasting the conditions would yield “larger and juicier British strawberries than previous years”. Forecasts for other berries are due imminently.

And he believes berry farming remains an attractive industry as a whole. While Defra has proposed paying older arable and livestock farmers to leave the industry to make way for younger generations, he points out berries don’t have the same succession issues.

“Unlike some sectors of farming where the children of growers look at the sector and think it looks deeply unattractive, I don’t think that’s the case in berries,” Marston says. “These are big, professional farms and most are seeing the next generation coming on board.”

Now, the main challenge for the BSF is to get the next generation of shoppers to buy berries. “The biggest buyers of berries are young families with kids,” points out Marston. “And older purchasers tend to eat berries because they always have. But if you look at people who are single, perhaps in their 20s and male – they are less likely to buy berries.”

He suggests that may be down to younger shoppers eating on the go more often, but clearly that hasn’t been an issue during lockdown. So Marston sees marketing as a key way to remove any remaining barriers to consumption. The aforementioned Jessica Ennis-Hill campaign is one example of how the industry is tackling the issue head on. And Marston says BSF has been trying to better target the next generations through social media, too, using influencers and featuring slick “movie-style” clips of fruit.

Most importantly, over two-and-a-half decades after entering the berries industry, he believes there are still plenty of exciting developments to come. Private capital is pouring into vertical farms and there are even picking and packing trials with robots. Marston suggests, half-jokingly, that berries could eventually be grown in polytunnels in car parks.

“In 25 years’ time, berry farms could be very different places to what they are at the moment,” he reckons.

One thing is for sure: Marston will never need to dress up as a strawberry to gain attention again.