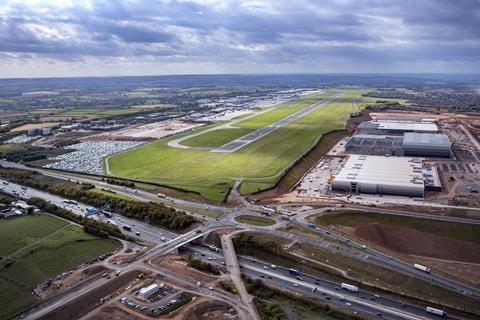 M&S, Amazon and Shop Direct are among retailers with DCs located near to East Midlands Airport

Supermarkets are under pressure to improve warehouse pay and conditions to secure sufficient labour for the peak Christmas period, according to a leading recruiter.

The typical supermarket distribution centre location, in a large industrial estate near a motorway, is becoming a drawback amid EU migrant labour shortages, according to Natalie Clifford, director at fmcg logistics recruitment consultancy Gap Personnel.

It meant DCs were competing with those of potentially many other retailers within a short distance, she said. Because the migrant labour pool was shrinking thanks to the uncertainty created by Brexit, workers were more able to pick and choose between thousands of jobs.

As a result, those DCs not offering the most favourable terms could find securing sufficient labour for peak demand “very difficult”, said Clifford.

Giving the example of East Midlands Airport, where M&S, Amazon and Shop Direct are among retailers with DCs located nearby, Clifford said: ”There’s a real concentration of warehouse and distribution operations as they’ve chosen the area specifically for the great transport links. Motorway accessibility is on their doorstep, but they are left competing against each other for labour to meet requirements.”

The pressure would intensify as some retailers raised pay ahead of Christmas, a step Amazon has taken in the past to ensure sufficient labour supply. “So you could have people who’ve been working at one warehouse consistently, but they’ll leave for next door over the Christmas peak period to earn more,” said Clifford

The pressure on labour supply also meant DCs were having to relax requirements and accept candidates with limited English, who might previously have worked for lower wages in food manufacturing, said Clifford.

“Food manufacturing has traditionally paid the £8.21 an hour living wage. Warehouse and distribution businesses have typically paid a level up, requiring at least basic English language abilities. But because the labour market has got tough, they’re now open to workers with minimal English language skills. As long as they can train them effectively and ensure health and safety inductions have been fully understood, they will take them.”

That meant food manufacturing, already struggling thanks to a reliance on EU workers to come to the typically less accessible, rural locations of sites, was suffering even more acutely, Clifford added.

“Even if we are able to recruit workers from nearby towns and cities, limited public transport can prove problematic for site accessibility in rural areas, and low rates of pay prove poor motivation for the longer commute,” said Clifford. “EU migrant workers have historically been the answer, and so it’s getting harder by the day to meet our clients’ headcount requirements.”