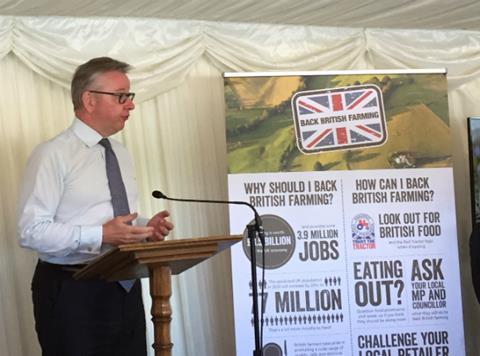 Food industry leaders have threatened to suspend co-operation with the government unless the threat of a ‘catastrophic’ no-deal Brexit is resolved, it emerged today.

The heads of more than 30 trade associations made the extraordinary move in a letter to environment secretary Michael Gove, saying they plan to boycott a raft of government consultations unless politicians are able to rule out the nightmare scenario.

The trade bodies, including the FDF, NFU and Dairy UK have said they will pull the plug on talks regarding a series of key government initiatives, including the consultation on a bottle deposit return scheme, a looming clampdown on HFSS marketing, an overhaul of the producer responsibility programme and plans for a plastic tax.

The letter to Gove says: ‘In fewer than 50 days, the UK will leave the European Union. The legal default is that we will do so irrespective of whether or not we have signed a withdrawal agreement and, at present, that no-deal Brexit looks ever more the likeliest outcome.

‘Businesses throughout the UK food chain - and their trade associations - are now totally focused on working to mitigate the catastrophic impact of a no-deal Brexit. Large amounts of time, money, people and effort are being diverted to that end.’

It adds: ‘At this moment of potential crisis for our industry, it cannot be “business as usual” within government. Neither we nor our members have the physical resources nor organisational bandwidth to engage with and properly respond to non-Brexit related policy consultations or initiatives at this time. Government has recruited many extra staff; we cannot.

‘We very strongly urge you therefore to require of your Cabinet colleagues a range of current and planned consultations that will impact food and drink, some of which are expected shortly, are firmly and clearly placed on “pause” until this uncertainty is over.’

Other talks the industry is threatening to pull out of include extending the mandate under ‘Making Tax Digital’. They have also demanded a freeze on a number of Defra consultations, including plans over the protection of woodland, a review of flood preparedness and water management improvements.

Government plans for the sustainable use of pesticides, a Clean Air Strategy and setting targets for the 25 Year Environment Plan should also be sidelined, the groups say.

Opinion: Government must stop the clock on policy changes and focus on Brexit to avoid chaos

‘We very strongly urge you therefore to require of your Cabinet colleagues that a range of current and planned consultations that will impact food and drink, some of which are expected shortly, are firmly and clearly placed on “pause” until this uncertainty is over,’ says the letter, first reported by Sky News.

‘If government seeks to press ahead with these consultations it will be seen by some as a sign of bad faith and many organisations may decline to respond.’

One leading source said: “The fact that we have felt the need to make this intervention shows just how concerned the industry is about the dire consequences of a no-deal Brexit. The letter also reflects the fact that organisations, especially SMEs, simply do not have the time to deal with this onslaught of consultations at the same time as facing the threat of Brexit.”

The BRC did not sign the letter although a source stressed that it agreed with the sentiment and that not signing it was “neither a snub not a difference of opinion”.

“The BRC agrees with this leter and has been making very similar calls to Michael Gove,” said the source. “We absorb a lot of the oxygen on Brexit so it’s good that this is being shared by a lot of other groups and it shows how widely the concerns are shared about the the impact of a no-deal.