Worried about chocolate, prime minister? Then hunt for a plausible Brexit trade strategy 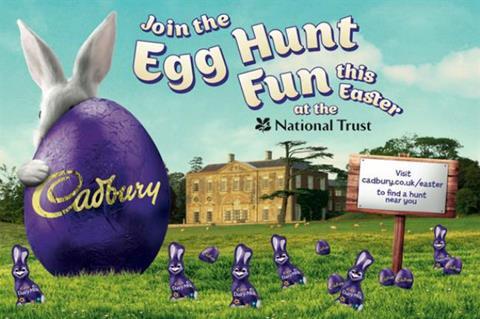 If Theresa May would only put as much passion into securing a post-Brexit future for the UK’s food and drink industry as she did into her criticism of Cadbury today, we could all sit back and relax.

The PM sided strongly with church leaders in the row that erupted after the National Trust rebranded its annual Easter Egg Trail event as Cadbury’s Great British Egg Hunt.

Cadbury, which sponsors the event, said it just wanted to broaden its appeal to non-Christians, which seems fair enough in modern Britain, and pointed out it still uses the word Easter in its promotional marketing for the event, as well as its wider seasonal promotions and products.

But that didn’t satisfy the Archbishop of York, who claimed the renaming of the event was tantamount to “spitting on the grave” of Cadbury’s founder, a dedicated follower of the Christian faith. May, a vicar’s daughter and – it turns out – a keen member of the National Trust, backed his views with gusto, condemning the name change as “ridiculous”.

“I don’t know what they are thinking about frankly,” she told ITV News. “Easter’s very important… It’s a very important festival for the Christian faith for millions across the world.”

Now, everyone is entitled to their own opinion on the true meaning of Easter, but May’s choice of words was perhaps a little ironic given the fact the government is currently plunging head first into Brexit having, frankly, put very little thought into it at all.

From what we can gather so far, not only is there little strategy for food and drink trade deals, there aren’t even enough trade negotiators in the country qualified do the job. And as for the legislation that governs our industry, it’s anyone’s guess what will happen once we emerge from the guiding hand of Europe and cast out on our own.

For manufacturers and retailers already struggling to cope with surging costs following the plunge of the pound, the prospect of years of uncertainty is more than a little worrying.

Mars has already warned it would be forced to hike prices on its bestselling chocolate brands if the UK failed to secure a decent post-Brexit trade deal. Confectionery imports will face a 30% tariff if the UK ends up trading with the EU under World Trade Organization rules – and that cost will have to be passed on to consumers.

If May doesn’t focus on the task in hand and come up with a plan quick, chocolate might become an unaffordable indulgence for some Brits. And that would really put the kibosh on the Great British tradition of the Easter egg hunt.