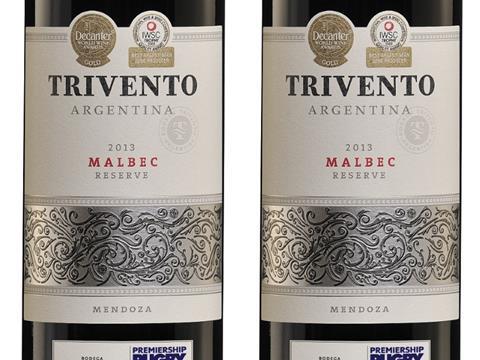 The sponsorship, which kicks off in September, will initially run for a year but there is an option to extend it by a further two years, the brand said. As well as matchday advertising in programmes and on screen at the double-header and the Premiership final at Twickenham, the deal will be supported with on-pack branding on its leading Trivento Malbec Reserve, and on branded FSDUs in store. The brand will supply wine to selected Premiership rugby events, including the Hall of Fame Awards, and have access to all 12 Premiership clubs. Concha y Toro said it would explore “other opportunities as they arise” – and was negotiating a close relationship with the current champions Northampton Saints.

Marketing director Clare Griffiths said the “powerful relationship” would encourage growth by raising awareness, boosting distribution and increasing ROS. “It will provide the brand with the perfect platform to communicate our adventurous spirit and to drive category value sales in the UK,” she added.

The brand saw “unprecedented” year-on-year growth of 200% in the off-trade in early 2014 driven by growing interest in Argentinean wines, the company said [Nielsen 52 w/e 29 March 2014], adding the brand was leading the Malbec trend. The brand had enjoyed an “exceptional” 12-week Christmas period, it claimed, with sales increasing 422% compared with the same period the previous year.