Bio & Me adds porridges and mueslis to gut-friendly lineup 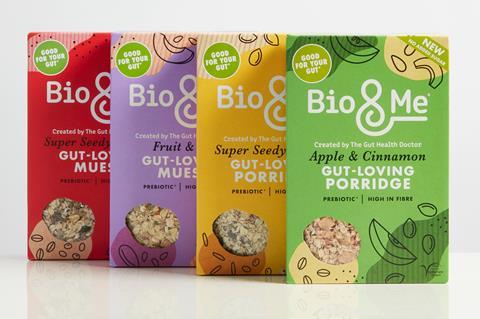 The range will launch at Booths & Planet Organic next month

Gut-friendly granola brand Bio & Me is adding a range of porridges and mueslis to its lineup.

Rossi told The Grocer: “There just really isn’t a product out there that I would recommend to my patients as being really good for your gut health”.

She said what was available either had added sugars or was “just oats, maybe with a bit of cinnamon”.

Bio & Me’s ranges would provide a “diverse range of plant-based ingredients”, said Rossi, of which the porridges contain 14 and the mueslis 16, such as nuts, seeds and grains to fruit & veg such as carrots.

“What we see in terms of scientific evidence is that people with better gut health have more diversity of plants in their diet and therefore get a variety of plant chemicals which feed the good bacteria,” said Rossi.

Both new ranges will feature the European Food Safety approved Good for the Gut health claim, in line with its granola products.

People’s awareness that “immunity and gut health go hand in hand” had increased, said Rossi, leading to the brand “smashing our goals” at its current retailers.