As Dry January becomes an increasingly popular new year pledge, our exclusive consumer research reveals who is taking on the challenge, their reasons why and how this will affect the soft drinks industry. Click here to download our findings in full. 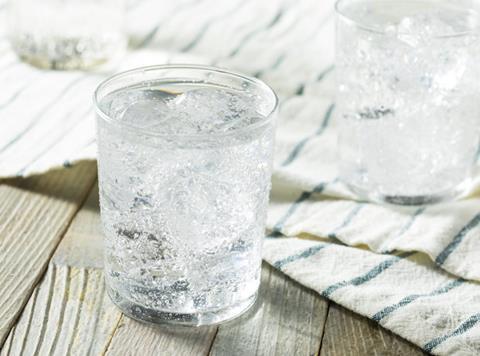 The festive period of excess is over. As Brits once again feel the impact of shrinking wallets and expanding waistlines, it’s time to dust off the ‘new year, new me’ resolutions.

Dry January is increasingly becoming a part of those pledges. According to organisers Alcohol Change UK, four million Brits pledged to go alcohol-free for a month last year in a bid to improve their health and save their cash.

So who exactly is taking on the Dry January challenge, and to what extent will it be a boon to the soft drink industry?

Using exclusive data from our poll of more than 2,000 consumers with Harris Interactive, we sum up what you need to know in 10 easy charts. 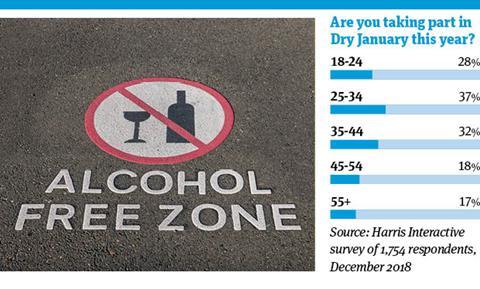 We’ve all heard the hype about millennials abstaining from alcohol. While they still remain a small proportion of the demographic – only 15% of 25 to 34-year-olds in our Harris Interactive poll said they didn’t drink at all – they do seem more conscious of alcohol consumption than older generations.

The proportion of 25 to 34-year olds intending to take part in Dry January was more than twice as high as the proportion in the 55+ age group. Overall, a quarter of consumers polled said they would attempt the challenge.

2. They are also planning to cut down alcohol intake on a longer-term basis 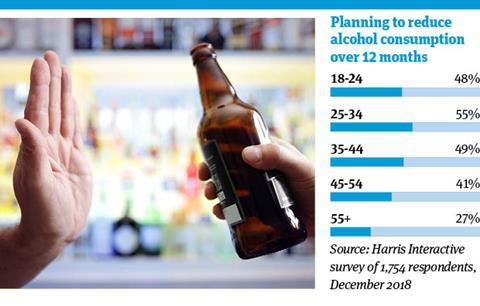 This enthusiasm for curbing alcohol consumption extends beyond Dry January. Again, the younger generation is particularly keen to cut back in the long term. Among the 25 to 34-year-old age group, you would be in the minority if you weren’t planning to reduce your overall intake over the coming year.

Of course, whether these ambitions will translate into practice remains to be seen. But the figures are indicative of the mindset among younger consumers. “This idea of taking some rebalancing action after a period of overindulgence is very much in the mind of the millennial,” says Richard Hall, chairman of food and drink consultancy Zenith Global. 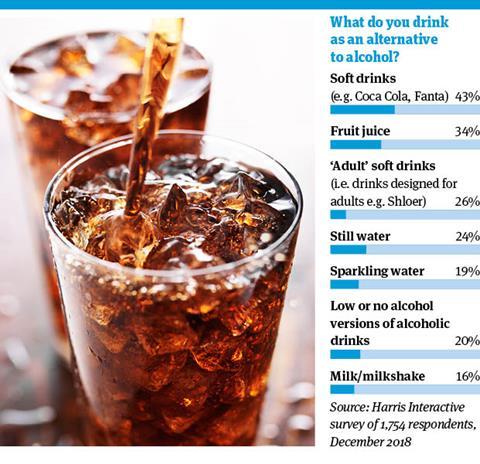 “I would have expected these figures to have been higher because there is new ground being developed in the non-alcoholic beverage sector for adults,” says Hall. Indeed, even Coca-Cola is getting in on the action with the US launch of Bar Nøne, a cocktail-inspired, no-alcohol range.

4. But these soft drinks have to be healthier than alcohol 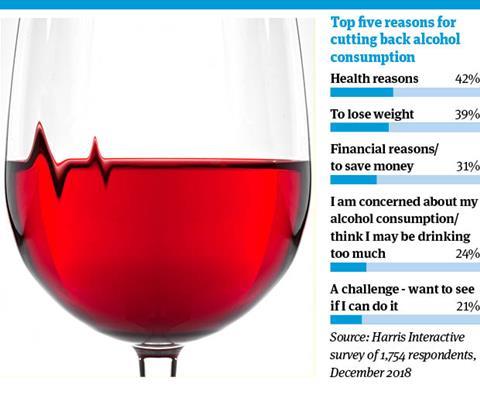 Health reasons and weight loss were comfortably the two most common reasons for consumers cutting back on alcohol intake. So full-sugar drinks are unlikely to be a popular choice among the alcohol-reducing crowd – even without considering the financial impact of the sugar levy. “If health and weight are the two main reasons for cutting back alcohol intake, diet or low-calorie drinks are likely to be a focus,” says Hall.

5. There is also demand for a greater choice of soft drinks 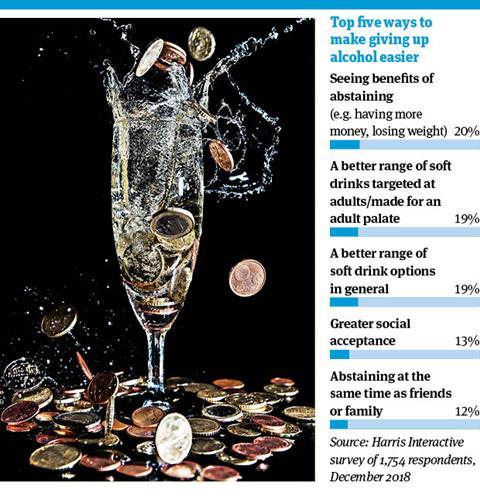 Nearly a fifth of consumers polled wanted a greater choice in soft drinks and ‘adult’ soft drinks. The figure may seem surprising to those who work in the food and drink industry. Indeed, Tesco offers a choice of more than 180 SKUs in its ‘fizzy drinks and cola’ aisle online.

Zenith Global’s Hall says this perception may reflect the more limited choice available in bars and pubs. “Often these products exist without the ability to distribute as widely as they would wish,” he says. “So yes, there is a huge range of products but some are quite small and niche. However, many are growing and will develop over time.” 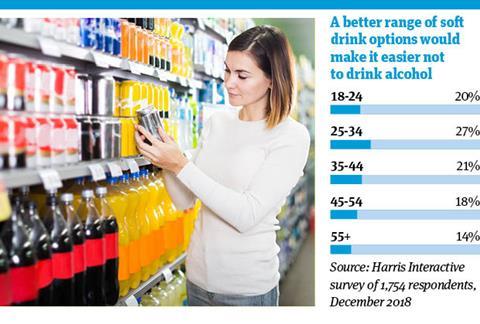 The desire for a greater choice of soft drinks was particularly strong among 25 to 34-year olds. More than a quarter of respondents in this age group said a larger range would make it easier to reduce alcohol consumption. This illustrates the more adventurous nature of these consumers, says Hall.

“People are more adventurous than five or 10 years ago, trying out things like kombucha,” he explains. “The Instagram world we inhabit means younger consumers in particular have more incentive to experiment, so they can share those experiences with their friends.”

7. There’s a gender split when it comes to the challenges of abstaining 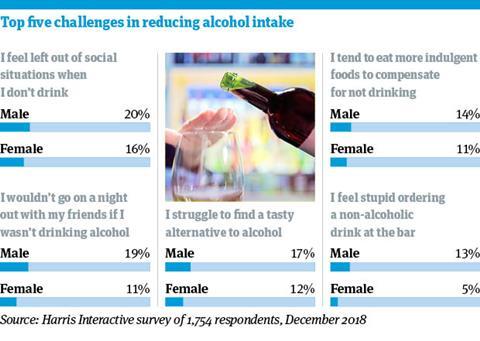 Social anxieties topped the list of challenges faced by consumers abstaining from alcohol. In the overall sample, 17% said they felt left out of social situations when they didn’t drink and 15% would avoid going on a night out with their friends.

Interestingly, there was a gender split in many of these attitudes. Men were more likely to report facing challenges in alcohol reduction – and the gender gap was particularly marked when it came to embarrassment over ordering non-alcoholic drinks.

8. And ‘adult’ soft drinks particularly appeal to the female market

Perhaps unsurprisingly given the above findings, men were also less likely to order ‘adult’ soft drinks than women. However, Hall believes it’s not all about social norms.

9. Tonics are the largest component of this market 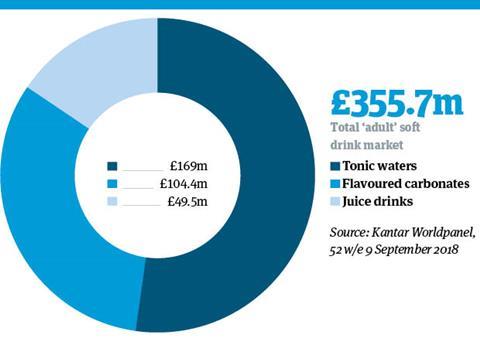 The total adult soft drink market grew 22.7% last year to be worth £355m, according to Kantar Worldpanel data. And tonics were a driving force behind that extra £66m in sales.

Tonic waters are now worth £169m, having grown their value by more than 40% over the past year. Fever-Tree has been the headline force behind this growth. Last year, the brand outdid giants such as Coca Cola in terms of growth by adding £42m to its value [[Nielsen 52 w/e 30 December 2017].

But there has also been stiff competition from Schweppes’ 1783 range, whose innovations over the past year have included a dark spirit mixer designed to enhance the taste of spirits like whiskies and rums.

10. But cost is the biggest barrier to buying ‘adult’ soft drinks 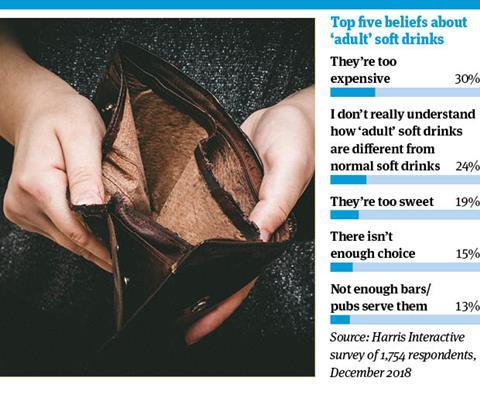 That three in 10 find adult soft drinks too expensive will hardly be music to the ears of the industry.

However, Hall says these perceptions are likely to be slightly skewed. “In bars, people are more conscious of the price of a non-alcoholic product compared with alcohol. They may expect soft drinks to be significantly cheaper,” he says.

There is also the question of value rather than price, he adds. “The premium priced ingredients of adult soft drinks are part of what makes them attractive, so premium value is actually part of the proposition.”