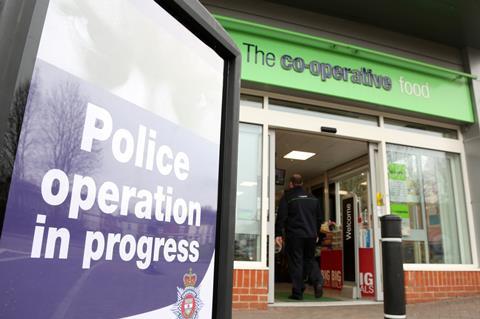 Central England Co-op has warned potential criminals “it is not worth the risk” as it sets out to implement a raft of new security measures.

The new measures come as part of an autumn and winter crime crackdown to keep colleagues and customers safe as the nights draw in and coronavirus restrictions continue.

It will introduce a service that allows staff to call for assistance at the touch of a button, as well as putting tracking devices in more products to deter thieves.

This will sit alongside a recently launched trial of body-worn cameras in its Erdington and Great Barr stores, which could also be rolled out across its entire estate.

The crackdown will be supported by an in-store poster campaign, closer links with local police forces, lobbying government for changes in the law and several measures that are already in place in stores including:

“We want to send a clear message out to anyone who might be thinking of committing a crime at one of our stores this autumn and winter: this behaviour will not be tolerated and targeting our stores is not worth the risk,” said loss prevention manager Craig Goldie.

“This campaign is designed to deter would-be criminals and ensure our colleagues and their families are protected from the physical and emotional impact of violence and aggression and feel safe to come to work.

“We are working closely with local police forces to crack down on these issues and have also installed a range of new security measures to assist us in this ongoing campaign.

“Everyone at Central England Co-op is proud to live, work and serve in our local communities. Now we need people to work with us to make sure that all crime – from theft and robberies to violence and aggression towards our colleagues – becomes a thing of the past.”

Central England Co-op has been running a long-term campaign showcasing its ’zero tolerance’ approach to violence and aggression towards colleagues.

Recently, CEO Debbie Robinson joined forces with 22 other retail bosses to write to Boris Johnson asking for greater protection for shopworkers who face violence and aggression from customers.

The campaign has also received backing from over 200 other MPs up and down the country and from across the political divide. Support has also come from several police forces and police and crime commissioners.