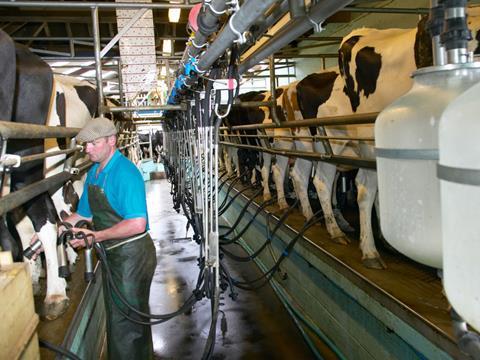 Rising milk prices have brought some cheer to dairy farmers

Average farmgate milk prices in the UK have now recovered to levels last seen at the end of 2014, before an abundance of supply started driving prices down to below the 20p per litre mark.

The UK average farmgate milk price, excluding retailer and processor bonuses, rose to 27.78ppl in July [Defra], the highest level since December 2014, when the average - which peaked at 34.52ppl in November 2013 - stood at 27.68ppl.

Average prices continued tumbling throughout 2014 and 2015, before hitting a low of 19.95ppl in June 2016. Some buyers were paying less than 15ppl at the height of the crisis.

Prices could rise even further, with Müller recently announcing it was hiking the price it pays by 1p to 30ppl from 1 October. Processors such as Meadow Foods, Arla, Glanbia and Dairy Crest have all increased their prices in recent weeks to near the 30ppl mark.

Supply shortages have been most keenly felt in products such as butter, says AHDB senior analyst Luke Crossman.

Crossman expects more to come. “I wouldn’t expect too much in the way of increases for liquid milk, but on commodity products such as butter and cheese, there will be pressure to increase prices,” he suggests.

However, he does not expect a glut of supply to return just yet. “We’ve had a recovery on the producer front, but we’ve only seen these strong increases during the past five or six months,” he adds. “Many farmers haven’t had the ability to invest and even pay the bills. So while current milk cheques are looking better, many farmers will still be feeling the effects of the dairy crisis.”