Cathedral City enters US market with trio of cheddar products 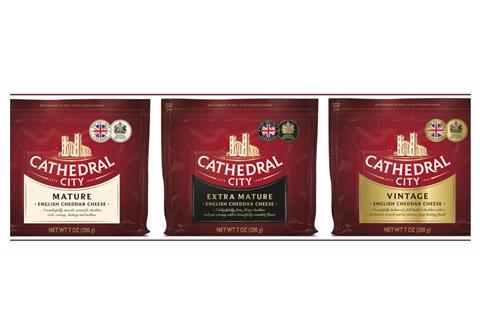 Major cheese marque Cathedral City has been launched onto the US market for the first time, its owner Saputo Dairy UK has announced.

Three variants of its Cornwall-produced cheddar cheese – Mature, Extra Mature and Vintage (all in 200g block formats) - have been listed in what Saputo called “national retailers” with the products expected to be available in more than 2,000 stores by the end of November.

Packs are set to feature the brand’s Royal Warrant alongside a Union flag in a bid to emphasise the cheese’s British provenance to American consumers.

The launch has been supported by a media campaign which has included a space on an 8,500 square foot, 18-storey tall digital billboard in New York’s iconic Times Square.

“With the successful launch of Cathedral City in Canada under our belt, we are now eager to distribute our Great British export more widely across North America,” said commercial director of Saputo Dairy UK, Adam Braithwaite.

“The UK’s favourite cheese brand deserves a wide audience and who better to share it with than the US – the largest nation of cheese-lovers in the world.”

Saputo launched Cathedral City into Canadian retailers Save-on-Foods and Loblaw last month, a move which had been “successful” according to the Canada-based dairy corporation.

It is currently upgrading its site at Davidstow to increase production capacity in light of Cathedral City’s expansion into North America.