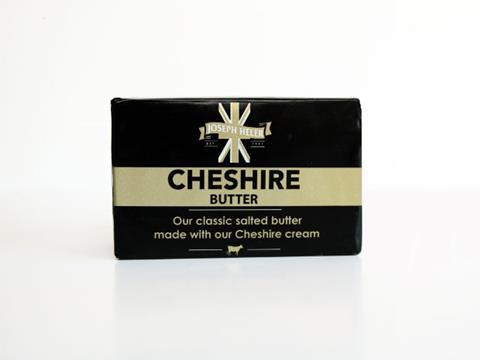 Cheesemaker Joseph Heler has moved back into butter after an absence of four decades.

Its Cheshire Butter relaunched this week for the first time since 1978, going on sale regionally and on the company’s website.

Joseph Heler has initially released the butter in 125g packs (rsp: £1.25) for specialist retailers with the aim of targeting smaller households and reducing food waste.

A larger 250g pack size was set to become available in summer at an rsp of £2, the brand added.

The two-ingredient butter was traditionally churned giving it a unique taste, said a spokesman, after the brand received many requests for a “real local butter”.

Made from whey cream, a byproduct of its cheesemaking, the product is packaged in black and gold foil stamped with the Joseph Heler logo to reflect its British provenance, while the gold would emphasise the quality of the product, it said.

“This Cheshire butter is batch made with 100% Cheshire cream and Maldon Sea Salt to give a distinct rich and creamy taste,” said Joseph Heler MD Mike Heler. “It also has a rich yellow colour that looks great melted on a piece of toast. This is a butter for everyone who loves real food.”