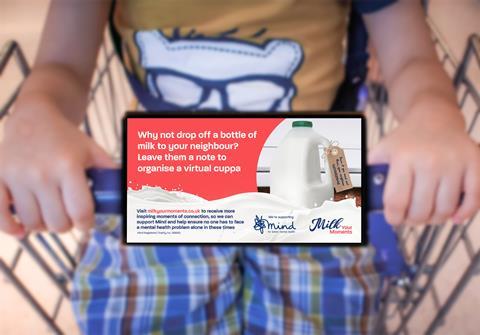 The dairy sector has hailed the success of its £1m-plus Milk Your Moments ad push following a huge spike in sales of core dairy items through the peak of lockdown.

The 12-week campaign, backed by funding from the dairy sector, Defra and the devolved governments, was launched in May in a bid to increase dairy consumption in the home and highlight mental health issues.

It followed a series of pandemic-linked blows to the sector amid a collapse in demand from the foodservice and hospitality industries, leading to milk price cuts, desperate pleas for help by cheesemakers with no market for their product and farmers pouring unwanted milk down the drain.

But with the ad push drawing to a close at the end of last week, new data showed consumers had connected with the campaign and with dairy in the home at the height of lockdown, said Dairy UK and AHDB.

Kantar data showed there were 2.9 billion cups of tea and 1.7 billion cups of coffee drunk over the eight weeks between 17 May to 12 July – increases of 21% and 19% respectively. Figures also showed the “overwhelming popularity of milk”, with 94% of UK households purchasing milk over the last four weeks of the period, compared with 16% buying a dairy alternative.

As The Grocer reported last month, cheese had seen “unprecedented increases in sales”, the two industry bodies said. Consumption increased by 48% during lockdown as people found themselves making their own sandwiches and lunches as well as in scratch cooking such as homemade pizza – which saw a 235% jump in online conversations.

Home cooking and the craze for banana bread also caused sales of butter to spike in the week of 22 March, with a year-on-year increase of 69% in weekly sales [Kantar].

The campaign’s target of raising £100k in support of mental health charity Mind was also achieved. Donations were generated through visits to the Milk Your Moments microsite and by encouraging text donations.

“Clearly when it mattered most, consumers turned to the foods they know, trust and enjoy when they were in the height of lockdown,” said Dairy UK CEO Judith Bryans.

“We all came together to make this campaign happen and we should be incredibly proud how it has created positivity for dairy and increased awareness around mental health issues, during such an uncertain time. We should also see it as a starting block for the future, because we need to talk to our consumers on an ongoing basis.”

The campaign not only supported the industry, it also demonstrated how the “crucial part to play in human connection as well as nutrition is a real step change for the dairy industry”, added AHDB head of dairy marketing Rebecca Miah.

“We should continue to be proud of our importance to society, with these strong growth numbers demonstrating the fact.”