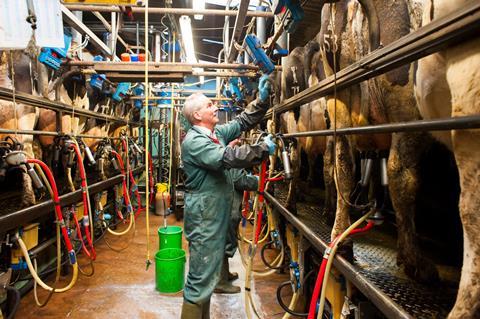 Large parts of the dairy sector remain on a knife-edge of profitability, and some processors may soon have to pass on rising costs to their retail customers, industry ­figures have warned.

Processors have been gradually increasing farmgate prices over the past month in response to strong global dairy commodity demand and a lower-than-expected spring flush in the UK.

Arla’s standard milk price is now at 32.79ppl, while many more suppliers – particularly cheesemakers – have also been hiking their prices in recent weeks.

With Defra’s UK average milk price for March standing at 29.72ppl, up 4.1% on the same time last year, the expectation was that prices would remain robust, suggested AHDB head of market specialists for dairy and livestock Chris Gooderham.

With this year’s flush also later than expected due to frost, and hospitality now reopening, Gooderham said he couldn’t “see any downward pressure on prices for the next two to three months”.

It comes in contrast to this time last year, when an oversupply caused by the closure of the hospitality sector during the first Covid lockdown led prices to collapse.

But with liquid milk processors in particular having seen big losses in recent years, any further farmgate hike may soon need to be passed on to the retail sector, said one dairy industry source.

“The industry as a whole is more resilient than it was a year ago, but processors are currently doing a lot of the heavy lifting. Margins are still not on an acceptable basis for many, so they don’t have much room to play with if farmgate prices continue to rise,” they said.

“We’ve already seen some cheesemakers ask for more money,” added John Allen, director at Kite Consulting. “The expectation is prices will spike, so retailers will be faced with processors asking for more money.”

The spot milk price is also currently low, according to various dairy industry sources, at around the 20ppl mark.

And the Defra average milk price hid “big disparities” in price at farm level, said NFU dairy board chairman Michael Oakes, with many farmers, particularly those supplying mid-market and commodity-focused processors, being paid much less.

“We’ve seen massive increases in input costs and we have less stocks of feed from last year to carry over, so many farmers – even the ones being paid the higher prices – are feeling a lot of pressure on their margins. Options for many are running out and it’s not a comfortable place to be.”