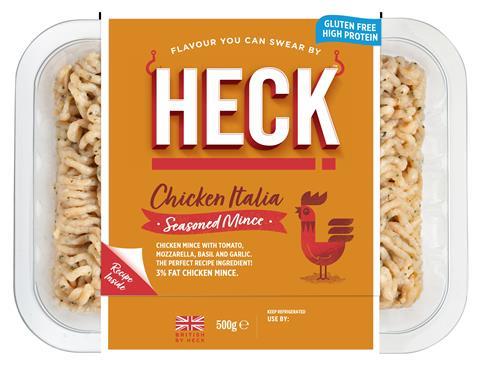 Sausage giant Heck has expanded its range with a first move into the mince category.

Heck co-founder Jamie Keeble claimed the NPD represented a first for the mults, with chicken mince previously only available from butcher shops or from specialist fitness sites.

The launch is part of a move by the brand to diversify its offering by entering new categories such as frozen and to continue growing its chicken and plant-based offering – which has been boosted by a multimillion-pound investment in manufacturing at its Bedale base in recent months.

“We wanted to bring [chicken mince] to the high street as it’s a great lean base to many recipes,” Keeble added. Each pack will come with dedicated recipes to inspire people to cook from scratch.

Following a well-documented spat with Aldi in 2018 over the discounter’s launch of a similarly packaged chicken sausage, Keeble’s father and fellow Heck co-founder Andy added the brand was now expecting other brands and retailers to copy the its move into mince.

“The sales team is running a sweepstake as to who will be the first to copy us,” he said.