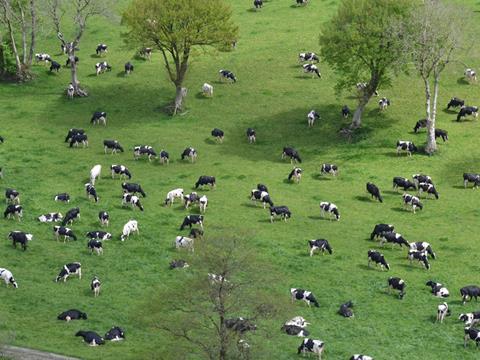 The NFU said it was ‘disappointed’ by recommendations

The NFU has condemned a report by the independent advisory Committee on Climate Change, which recommends reducing animal agriculture in favour of rewilding.

The report, ‘Land use: Reducing emissions and preparing for climate change’, said cattle and sheep were directly responsible for 58% of UK agricultural emissions in 2016, with further emissions resulting from growing their feed. Farming contributed 10% of the UK’s greenhouse gas emissions in 2016, it said, equivalent to 46 tonnes of CO2.

It cited advice on red meat reduction in the government’s Eatwell Guide, which suggested cutting down beef and lamb consumption by 89% and 63% respectively in favour of pulses and legumes. Together with a 20% reduction in dairy products, the reduced demand would free up land to re-plant woodland and restore natural peatlands, it said.

However, the CCC did not expect consumption to fall that drastically. Instead, it advocated a 20%-50% reduction in demand for red meat by 2050, suggesting chicken, pork, lab-grown meats and alternative plant-based proteins as replacements requiring less land.

In depth: How meat marketers are battling back against price wars and veganism

‘Diet change away from the most carbon-intensive feedstocks would reduce dairy, beef and lamb numbers by up to 46% and increase poultry and pigs by around a quarter,’ the report read.

Farming body the NFU said it was “disappointed” to see the committee recommend reducing livestock numbers, saying policy produced in line with the advice would be blinkered.

“The NFU has been clear with its position on British farming’s role in tackling climate change. Reducing livestock numbers in the UK is not a part of that policy,” said president Minette Batters.

“The report simply does not recognise the environmental benefits grass-fed beef and sheep production brings to the UK. It would be a fundamental mistake to design a farming system solely around an approach that mitigates greenhouse gases without any regard to the wider impact of such a policy for our environment and our food supply.”

Reacting to the report in a statement on its website, Defra said its 25 Year Environment Plan was committed to addressing climate change by improving the resilience of infrastructure, housing and the natural environment. It also promised its upcoming environment bill would build on those foundations.

“Climate change is also explicitly among the ‘public goods’ listed in our Agriculture Bill that we want to pay farmers for outside the EU,” added a Defra spokesman.

The Committee on Climate Change’s recommendations reiterated the findings of an Oxford University report released last month, finding the average global citizen needed to reduce their pork consumption by 90% and beef consumption by 75% to prevent further rises in temperature.

Opinion: Veganism was behind the ‘meat tax’ hype – so what happened to critical thinking?