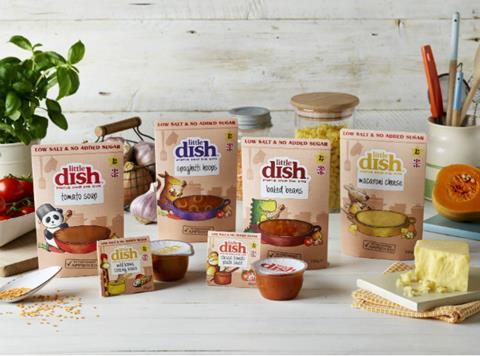 US investment firm Profile Capital has acquired a majority stake in Little Dish, valuing the healthy children’s food brand at $21.5m (£17m) as it draws up plans to break the American market.

Founder Hillary Graves and CEO Dean Brown will retain a significant minority holding and work alongside Profile, a US family office based in Chicago, to internationalise the brand.

The husband-and-wife team, who will continue to run the business in the UK and US, will use the additional firepower to further accelerate UK growth and fund expansion into the US, their first export market.

Little Dish launched its fresh meals for toddlers in a handful of stores in 2006 and today has nationwide listings for its expanded range in the chilled meals and baby aisles across Tesco, Sainsbury’s, Asda, Waitrose, Morrison’s, Ocado, Co-op, Booths, Boots and Nisa.

The business, which made its first move into ambient meals and snack in May, is currently growing 40% year on year, with 2017 retail sales value expected to hit £15m by the year end.

Its a quiet end to the week before City activity steps back up next week.

In this week’s edition of The Grocer live later this morning, growth slows as dairy and meat hikes pile pressure on Higgidy, Wild Card Brewery seeks £250k from crowd to boost capacity and how much should we read into early Whole Pay Check price cuts?

The grocery sector’s biggest riser was Premier Foods (PFD), which jumped 5.1% to 41.5p yesterday after it announced the completion of a crucial deal with Mondelez (MDLZ) to produce Cadbury cakes under licence.

McColl’s was up 0.9% to 269p after announcing yesterday sales jumped 31% in the third quarter as the convenience retailer integrated almost 300 Co-op stores into the business.

Mondelez International fell 2.4% to $40.66 in the US after Warren Buffett ruled out a bid for the company.